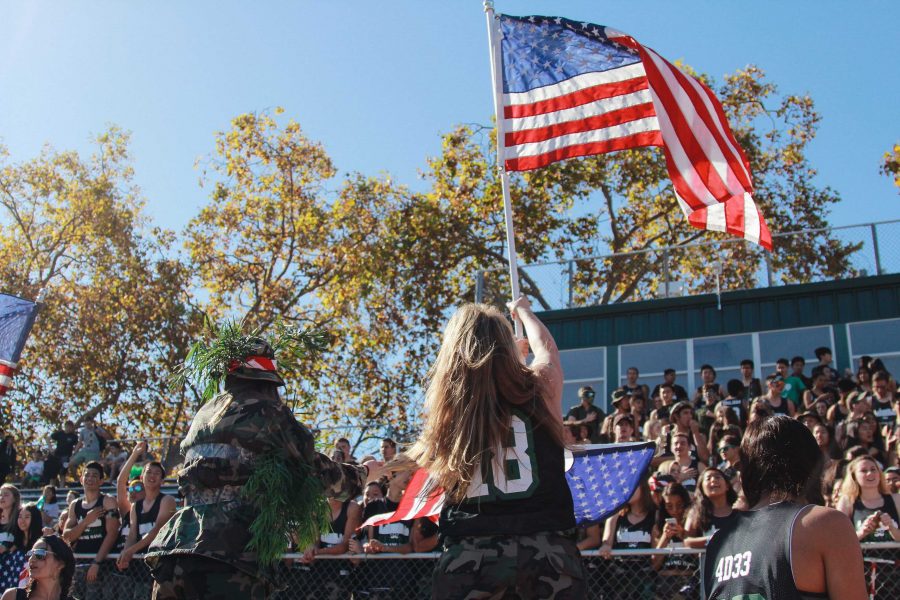 There is one week Palo Alto High School students always look forward to: Spirit Week. Renowned for its emphasis on class bonding and exciting rallies, Paly’s Spirit Week brings fierce competition between the grades as each strives to take home first place. Despite the heated nature, themes of good sportsmanship and unity still play an important role. However, the events weren’t always this way, with past Spirit Weeks marred by inter-grade fights and poor gamesmanship.

The Paly Voice commends the Associated Student Body, alongside the administration, for their work at Paly year-round. The change in the culture of Spirit Week, transitioning from a week plagued with animosity to one that promotes intra-grade and inter-grade unity, deserves special recognition.

According to junior ASB Spirit Commissioner Sarah Mitz, recently, ASB created new rules regarding cheers, deducting up to 100 points each day for poor sportsmanship if there were any “mean cheers” in an attempt to “avoid feuds between classes.”

“I think that the rules make it so that the class as a whole can’t put down another class, but there is still competition,” Mitz said.

While also trying to alleviate tension between grades, ASB also emphasized the importance of unity within each class.

“We had games that involved a lot more people than we have in the past, and also had a game that was teachers against students on [in] the Advisory rally, so that we could have at least one event where all kids were cheering for the same team and to promote unity,” Mitz said,“We really tried to get people involved in their class and build each other up, rather than creating a goal of putting others down.”

Despite this progress, many Vikings mistakenly resent Spirit Week for being a rigged system. It is a common perception among students that ASB manipulates the points so that the seniors always come in first, juniors place second, and sophomores and freshmen receive third and fourth, respectively. This has certainly been the pattern for the past couple of years, and with the lack of transparency, the notion that Spirit Week is rigged continues to be popular.

There are, however, steps ASB can take to change these perceptions of Spirit Week, most notably holding judges accountable by having them explain their decisions. While ASB releases the score breakdown each night, there are no explanations for more subjective rulings, such as “Best Dressed,” “Cheers,” class floats and class dances.

These four categories have a crucial impact on overall scores, and to many students, the judging often seems arbitrary. If ASB were to have judges anonymously write down their reasoning behind their decisions and publish those ballots, potential for score manipulation would be removed. With everything out for students to view, the notion that the competition is rigged would be drastically reduced.

ASB should also use the large student participation during Spirit Week to encourage and advance different philanthropic programs. Already in place, Rise Together Education, a nonprofit organization, mentors and gives financial aid to low-income, high achieving Paly students. Each Spirit Week, they run The Paly Spirit Store, which allows students to purchase spirit gear, the profits from which support the organization.

According to the student representative on the RTE board, senior Katie Laursen, while the Spirit Store is not a large source of income, it is essential in raising awareness about the program. She welcomes opportunities to work with ASB and the administration to promote RTE and similar programs, especially during Spirit Week.

“I think that Spirit Week is such a crazy and fun time for students and our thought was to tie in this great cause that provides mentoring and scholarship money for our low-income classmates,” Laursen said. “RTE would love to find ways to collaborate with ASB because they are really good at organizing events and getting the word out about them.”

Programs like this should be further supported, as they funnel the competitiveness of Spirit Week into supporting the community around us. Recently, a string of natural disasters has hit our country and state, displacing and destabilizing thousands of lives. If ASB were to simply set up a food and clothing drive, for example, awarding the grade who donates the most items a certain amount of points, students would be more inclined to contribute. This would require very little additional work, and ultimately have a large positive impact on the overall community.

Both ASB and the administration still have work to do in maximizing Spirit Week’s potential. However, despite the rocky history of Spirit Week and misconceptions about the validity of results, ASB has done an exceptional job in making the week one of the most memorable and enjoyable parts of the Viking experience.