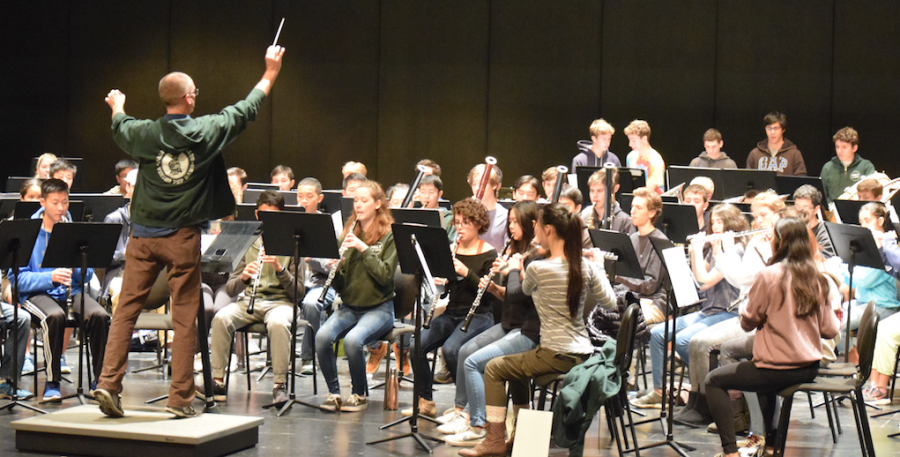 The program features a variety of different selections, including a jazz arrangement and classical instrumental band pieces. According to junior oboe player Maya Star-Lack, the Symphonic Band will play “Second Suite for Military Band in F-major” Gustav Holst.

According to junior flautist Charlotte Kadifa, the Jordan eighth-graders, Freshmen band and Symphonic band will each play one or two pieces separately before the bands combine to play “Promenade and Great Gate of Kiev” by Modest Petrovich Mussorgsky.

“At the end of the concert we all play one song together,” Kadifa said. “We work on it with our individual classes and then the day of the performance we all meet.”

The concert to the band’s regular schedule of concerts and football games and will allow the upperclassmen to perform with the freshmen outside of the pep band.

“We don’t usually play with the freshmen during the concert season,” Kadifa said.

The concert will provide an opportunity for Jordan band students to play with more experienced musicians and enjoy being part of an authentic high school band concert. Each year, the Paly band plays one concert with Jordan band and performs with them at one football game as well.

“It’s always fun because we meet new kids that could be part of the band next year,” Kadifa said.

“It’s always very interesting to hear what future Paly band members will bring to the band,” Starlack said. “It’s nice to know who my next classmates will be.”