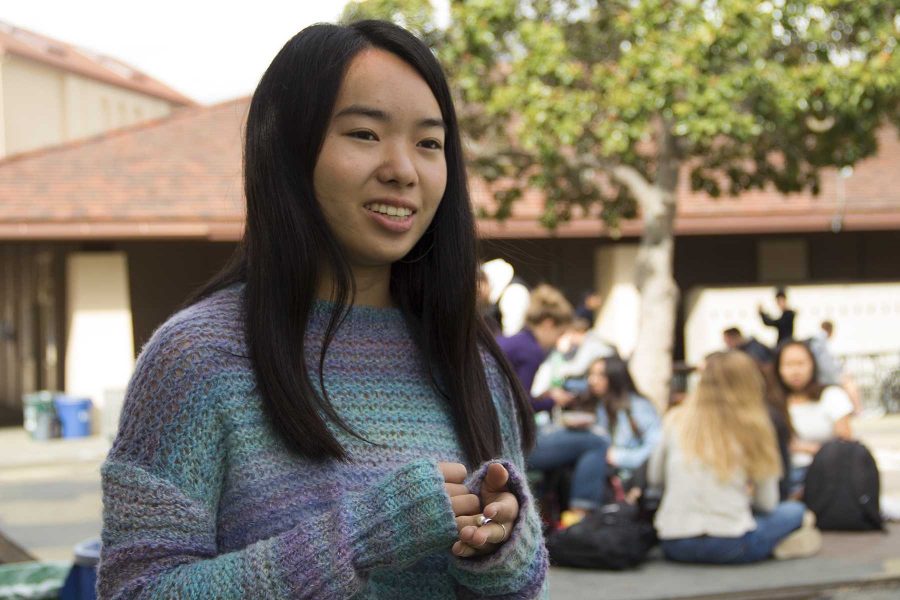 Palo Alto High School senior and organizer of the 2016 Palo Alto Peace March, Hana Morita, speaks about her involvement in activism. Morita is one of the founders of the student-run publication Anthro, a magazine that provides a platform for students from Paly, Gunn High School, and Stanford University to share opinions and promote activist causes. According to Morita, the magazine was originally founded as a perspective magazine, but has evolved into a platform for activism following the 2016 election.

On the anniversary of the 2016 Palo Alto Peace March, where hundreds of students marched to promote tolerance in response to the divisive 2016 election, two of its organizers are reflecting on their involvement, the current state of student activism, and the future of activism in Palo Alto.

In a city that voted 88 percent in favor of Hillary Clinton, according to the Santa Clara County Registrar of Voters, waking up to the news of Trump’s election was jarring for many Palo Altans.

“Everyone was just shocked and devastated. My parents were crying because they were so devastated,” Palo Alto High School senior Hana Morita, one of the organizers of the march, said. “There was just this overwhelming feeling of powerlessness.”

The next day, Paly students flocked to social media to share their thoughts and opinions on what many saw as a monumentally destructive event.

“There were posts in the Paly Facebook group that were kind of heated, and there were multiple people leaving comments adding to the argument,” said Zoe Stedman, Paly senior and co organizer of the march.

Morita, seeing these debates online as fruitless, decided to act and created a group chat, where she connected a group of students who she knew were passionate on the topic. The group became inspired by other student protests happening around the country.

“People were saying that maybe it [the most useful course of action] would be best to show our opinions, to show unity in the school,” she said.

The organizers wanted to use the march to communicate a positive message in a time of division, according to Morita.

“We decided we really wanted to create something positive, so we called it the Palo Alto Peace March,” she said. “We wanted to include everybody and be a welcoming, open community, a loving community, so that’s why we focused more on that [unity] than on being particularly anti-Trump.”

Stedman described her thoughts as she realized the success of the march.

“When we were standing on the quad, there were already a bunch of people gathering,” she said. “As we were marching into the parking lot, there were people following as far as we could see.”

She went on to describe how the turnout affected her and her and the other organizers.

“It [the march] was so much work, but it was so gratifying,” she said.

The march was the largest show of united student activism at Paly in recent years, and while students at schools such as Berkley High School have participated in multiple acts of civil unrest, staging walkouts regarding issues ranging from police brutality to the DACA rescindment, most Paly students have remained silent since.

“Living in such a bubble, I do think that there is a lack of urgency,” Stedman said. “Being surrounded by a mostly liberal, affluent community, many people take for granted certain things. I think some people, although they disagree with things, like certain issues taken up by Trump, don’t have urgency to react, because we’re protected,” she continued. “Some people take for granted this security we have, though other people outside our bubble will be affected, even some people in our bubble.”

Stedman described how this “bubble” manifests itself on campus.

“Even I have been guilty of pretending that I don’t care, and I think that a lot of other people do it [pretend not to care], because it’s easier that way, to say ‘oh, it’s fine,'” she said. “There are all these bad things happening, and we could all be doing something to fix it, but nobody really wants to say that.”

Stedman used Paly’s Social Justice Pathway, a program on campus that puts an emphasis on learning from a social justice perspective, as a way to illustrate the range of social engagement in the Paly student body.

“I remember freshman year, when we were hearing about the Social Justice Pathway, one of their main selling points is that they are so involved [in the community],” she said. “It’s interesting that there are some people at this school who are very ready to go for it [activism] and get involved in activism, and there are others at this school who don’t care about activism at all.”

Morita, who is one of the founders of club-based, student-run activist magazine Anthro, which provides a space for students in Palo Alto to share their political opinions and acts as a platform to promote activist causes, detailed her experiences discussing the magazine with other students.

“I think some people are scared of activism, or labeling themselves as activists,” she said. “During Club Day, I was running the booth for my club Anthro. I noticed that as soon as we said that we were an activist club, many people were put off by that, like ‘Oh that’s not for me.'”

Stedman believes that activism is often a necessary response to problems that threaten unity.

“Anything that challenges our unity as a school warrants a reaction that responds to it, in a way that shows we can be unified as a school, even though there are people at this school in both political parties, and they have really differing views,” she said.

Morita suggested various ways students can get involved in activist causes in the future.

“There are a lot of clubs you can join, and also a lot of things you can do outside of school,” she said.

Student-led clubs such as Anthro, the Conservative club (a chapter of  Young Americans for Freedom, a conservative activism organization), and Democrat Club all offer spaces for students to speak about organizing events and share their views in a safe way.

Additionally, larger organizations such as the Palo Alto branch of the League of Women Voters, a non-partisan group with the goal of registering voters, and Amnesty International, a world-wide human rights advocacy group, have clear ways for students to get involved.

Stedman stressed that while there are a range of views held by students, they can still come together around a cause.

“We have this huge range of people at Paly,” she said. “Any cause that people across that spread can be unified in is very worthwhile.”