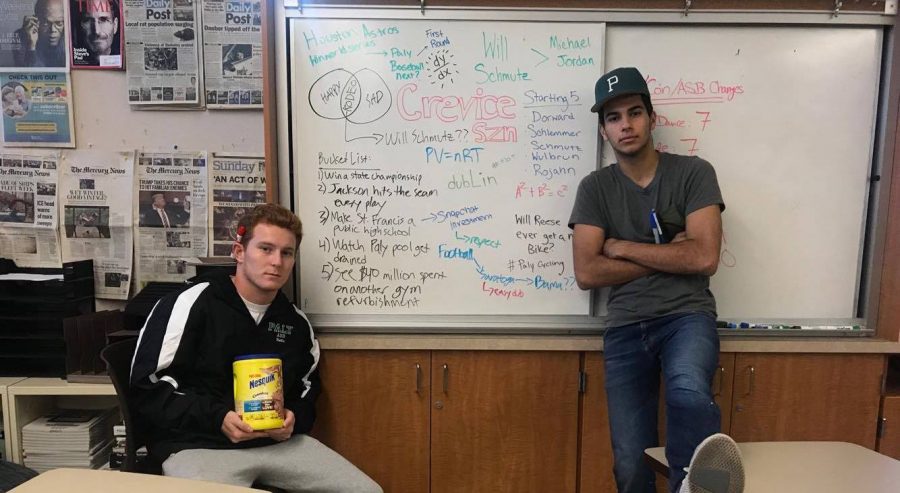 Much has transpired in the Paly sports world since we published our first edition of this column almost two months ago. In the second edition of Five things we like and don’t like, we take a look at the successes (and failures) of teams this fall season and look forward to what is to come in the winter season.

1. The return of the rodeo

It’s the most wonderful time of the year and we’re not talking about the holiday season. Palo Alto High School boys’ basketball is back. Skip your sister’s wedding, take a raincheck on your grandmother’s funeral, and blow off Shabbat dinner and Sunday mass. Will Schmutz and the Paly Vikings have returned and are looking to rock the Paly sports world again with a healthy mix of talent, toughness, and durability. According to starting forward William Schlemmer’s Snapchat story, the Vikings have been hitting the weight room and have gotten absolutely huge in the offseason. Last year, the Vikings captured a Central Coast Section championship, went to the semifinal of the NorCal Division One State Championships, and finished with an overall record of 26-5. They’ve got a new gym, a boatload of returning talent and experience, the Paly faithful, and a will to win. The rodeo has returned.

2. Football gets a big dub on homecoming game

After an injury-plagued season for the Paly football team, junior quarterback Jackson Chryst and running backs senior Paul Jackson III and junior Aiden Chang put the team on their back and powered them to a 42-21 victory over the Saratoga Falcons last Friday. Chryst threw for 167 yards and three touchdowns, while Chang and Jackson III contributed 126 and 111 yards on the ground, respectively. Jackson flexed on the Falcons, scoring three total touchdowns, two on the ground and one in the air. Picking up their second win of the season, the Vikings are now in third place in the De Anza League and in contention for a CCS berth, where the top four teams qualify, and we hope they ride the momentum into their final games of the season.

Girls’ volleyball is good. Maybe even great. They’re on a 16-game winning streak (their last loss was Sept. 9), went undefeated in De Anza League play (12-0) losing only seven sets in 12 games, and are ranked 29th in California. Their stellar regular season performance was good enough to allow them to qualify for the CCS Open Division Tournament as the 6th seed. Paly, one of two public high schools talented enough to make the Open Division, will take on the best of the best in the Bay Area, starting on the road against the St. Francis Lancers. Another perk of the girls qualifying for the Open Division is an automatic berth in the state tournament. While competition in the CCS Open Division will be stiff, Paly has the skill and chemistry to make some noise.

Sometimes, the chips just don’t fall your way. A brutal final week of the season for boys’ water polo ended in disappointment last week. A one-goal loss to Lynbrook in SCVALs effectively eliminated our boys from postseason contention, as Lynbrook clinched the final spot in the Division I CCS tournament. Boys’ water polo entered the season with high hopes and aspirations were not achieved. Their season was a series of what-ifs, with seven losses by three goals or less, two of which came in the last three games of the season. A victory in either of those games would most likely have resulted in a CCS berth. While Viking faithful are rightfully disappointed, the girls’ team was able to secure a berth in their Division I CCS Tournament.

Among the confusion during last Saturday’s Homecoming dance following a student’s medical emergency, students were directed to the previously roped off big gym. The gym floor was not prepared for heels and dress shoes (there was a reason the whole small gym floor was covered in tiled carpet), and as students began dancing on the floor, scratches and floor marks instantly littered the court. Though this was an unfortunate and unexpected event, we do not disagree with admin’s decision to send students to the big gym at the time. It just was unfortunate that the gym was marked up, despite there being ample space in the hallways of the massive gym complex to accommodate all the students at the dance.