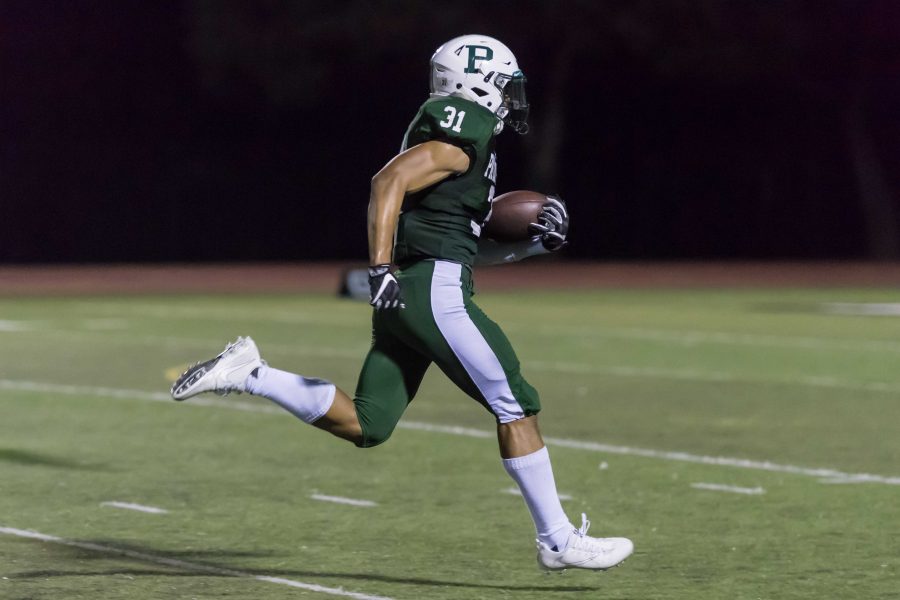 With a surprising chance emerging for the Vikings to make it to the Central Coast Section play-offs, the Palo Alto football team (2-6, 0-4) will play its last home game of the season against the Los Altos Eagles (2-6, 0-4) on “senior night” at 7 p.m. tonight.

Paly took on league opponent Saratoga High School (0-8, 0-4) last Friday, trouncing the Falcons from the first snap. The Vikings won, 42-21, keeping their CCS playoff hopes alive. Paly is now in a three-way tie for third place in the De Anza League, with the top four teams receiving automatic bids to playoffs. According to maxpreps, a win tonight would secure a CCS berth for the Vikings.

According to senior defensive end Bryant Jefferson, the Vikings regained confidence with the win over Saratoga.

“We had a lot of confidence and we had a really good passing game, that should transfer to this game,” Jefferson said.

According to Chryst, this is a must-win game for the Vikings.

“We will carry the momentum from last game into practice this week and come out with our energy on Friday,” Chryst said.

Junior running back Aiden Chang and senior running back Paul Jackson III rushed for a combined 237 yards, with Chang rushing for 126 yards and Jackson for 111 yards. Jackson added to his impressive stat line with two rushing touchdowns, while also snagging one more through the air.

“Last game definitely built up our confidence again coming off of two back-to-back losses,” Jackson said. “We got rolling after the first quarter and our play really showed each of us what we were capable of.”

Tonight, the Vikings will honor 12 seniors for their last home game.

“I’m just looking forward to playing in front of all my friends at home for the last time,” Jefferson said.

Among these seniors, Paly will graduate star running back Jackson, who has had an impressive career for the Vikings. In three years on varsity, he has totaled 2634 rushing yards and 423 carries. Despite an injury at the beginning of this season, Jackson has averaged 5.4 rushing yards per carry on the season.

Los Altos is winless in league, but are coming off a 35-0 win against school rivals Mountain View (3-5, 2-2) out of the El Camino League.

“In order for us to win on Friday we have to be disciplined and we have to be able to capitalize on our opportunities,” Chryst said.

The Vikings will also face the Wilcox Chargers (5-3, 4-1) in their last regular season game of the year, 7 p.m. next Friday at Wilcox.