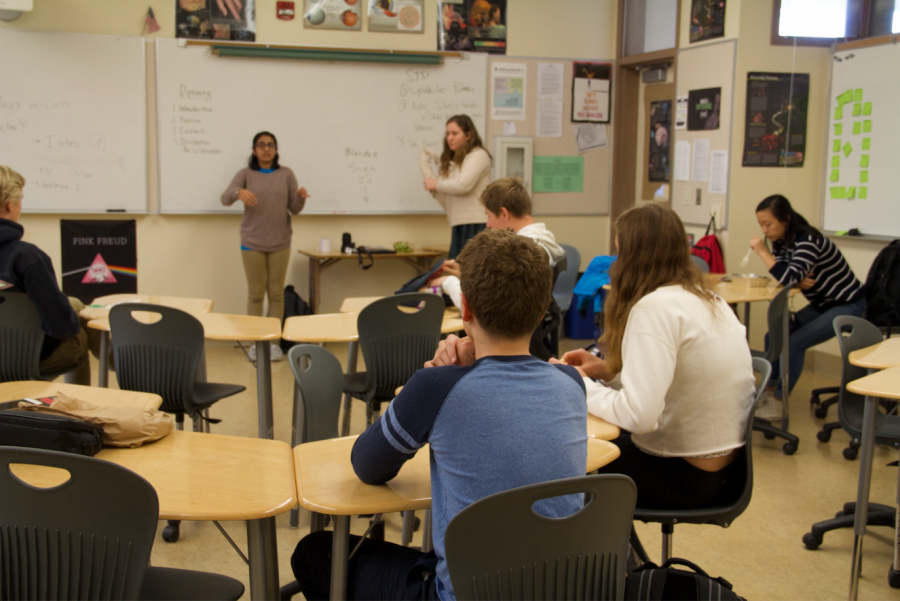 Model UN members use impromptu speaking drills to prepare for their mock conference, which will take place this quarter.

The Model United Nations Club is practicing for the conferences it will attend next semester through a series of simulations spread over three weeks at Palo Alto High School.

The club’s preparatory work is based on a typical MUN conference and began last Monday. According to MUN President Simran Pujji, members will convene every Monday for the next two weeks during lunch to debate the quest for Antartica in the year 2317.

“It’s a very dystopian world at that time,” Pujji said. “The ice has melted and so you can live in it, and delegates are representing different countries that want a piece of Antarctica.”

In the large-scale conferences the club plans to attend next semester, students from different schools will each be assigned a country to represent and a committee that they will be a part of.

“We have to work together in that committee with other delegates from other schools who represent different countries and different viewpoints,” Pujji said.

Pujji hopes the activities the club has organized at Paly will provide MUN members with an opportunity to sharpen their skills before the Santa Clara Valley Model United Nations conference in January, which attracts over a thousand delegates from high schools across the west coast. Paly has historically been successful at SCVMUN, winning six awards at the conference last year.

“We want to develop everyone’s speaking skills — a lot of it’s impromptu,” Pujji said. “You know the material, but you have to come up with and formulate something to talk with everyone else about.”

“Research is really important coming into a conference,” Pujji said. “If you don’t have the background about a topic or a country it makes it really hard to participate.”

Pujji urges anyone interested in participating in MUN to contact her or attend a club meeting on Mondays at lunch in room 805.

“We would love new members, and we have a couple extra countries that we haven’t filled for this mock conference,” Pujji said. “The more people who get involved in MUN, the more we can make this a bigger and better club.”