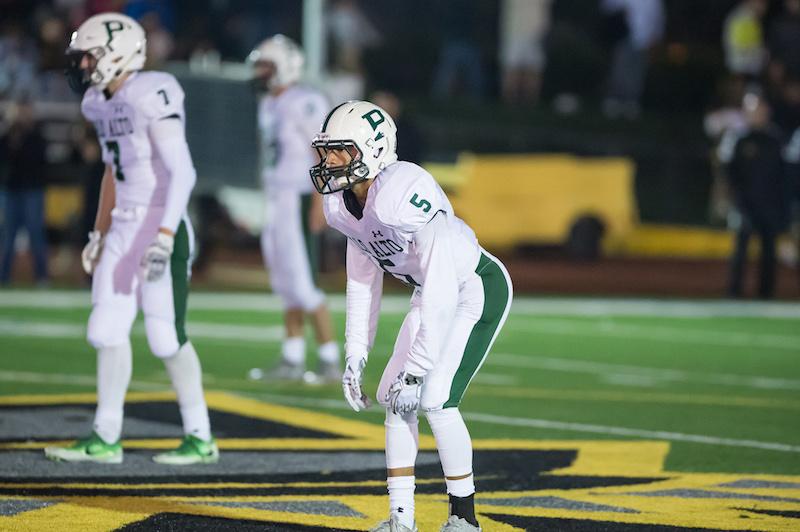 Junior cornerback Damion Richard-Valencia awaits to defend a Mountain View High School defender during a road game last season. Richard-Valencia has been the cornerstone of the Paly secondary and will continue to be a key player in the Vikings' defense. Photo: David Hickey 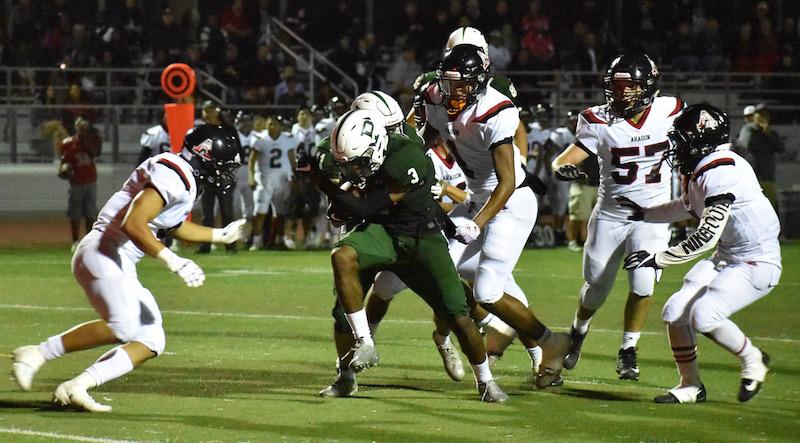 Sophomore wide receiver Jamir Shepard pushes for his second touchdown in the second half of the Vikings’ game against Aragon High School. Shepard stepped up against the Dons, helping make up for the absence of star senior runnings backs Paul Jackson III and Stone Latu. Photo: Noah Yuen

According to head coach Daniel Sullivan, the Vikings need to capitalize on its offense.

“We need to be able to force some turnovers to get the ball in our offense’s hands and we need to make some big plays to be successful,” Sullivan said.

The Milpitas Trojans have posted a perfect record this season and are currently the No. 1 team in the De Anza League team. Milpitas senior quarterback TyRee Bracy leads the Trojans offense with 817 passing yards on the season, according to maxpreps.

According to senior running back, Paul Jackson III, Paly needs to start strong.

“For us to be successful we all need to do our individual assignments and make sure our bodies are taken care of, nutrition wise,” Jackson said. “Also, we need to start the game off with a lot of energy.”

The Vikings will be coming off an unexpected “bye week,” as a result of the poor air quality from wildfires in the North Bay.

According to Sullivan, this will extend the Vikings’ regular season for one more week. Last week’s scheduled game versus the Wilcox Chargers (3-3, 2-1) is now set to take place on Thurs., Nov. 9.

In addition to the extension of the season, recent practices were moved inside.

“The air quality has been an obstacle lately as we have had a game canceled and several practices moved indoors,” Jackson said. “Though we weren’t able to go full speed and run plays indoors we managed to practice the mental aspect of the game while we were indoors.”

Since the beginning of the season, injuries have sidelined crucial players, however, the team does not view these setbacks as an excuse for its record.

According to Sullivan, many players have been stepping up in place of big offensive contributors.

“[Junior quarterback] Kyle Mostofizadeh and [junior running back] Aiden Chang have stepped up well for our team this season,” Sullivan said.

Two weeks ago, Paly fell to the Los Gatos Wildcats, 31-8. Chang led the offense for the Vikings with 137 rushing yards.