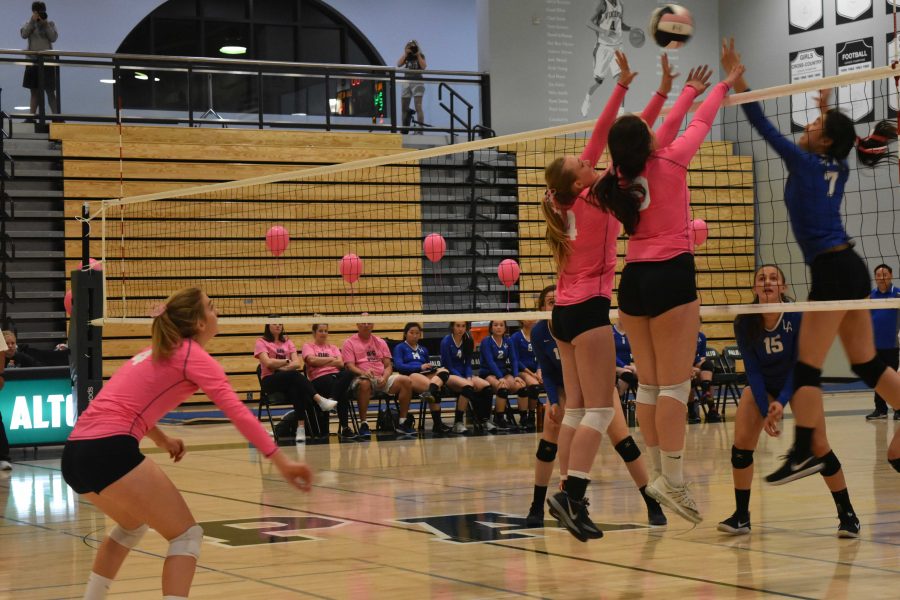 Paly players jump up to

Beginning the annual Dig Pink match with a strong start, Paly triumphed during the first game while keeping Los Altos below 20 points.

The Vikings’ front row had a strong presence, especially senior hitters Chelsea Fan and Denise Ringwalt. Fan did not disappoint, executing 15 kills, while Ringwalt maintained consistent hits and coverage at the net.

In the second set, Paly lost to Los Altos after letting many volleyballs hit the floor. The Paly Spirit Squad performed after the second game, wearing pink hair ribbons to fit the theme. The energy boost was not enough to help the Vikings as they began the third set, where they were soon down by a close but seemingly unbreachable three points.

Not giving up, Paly brought the score to a tie at 24. Both teams crept up point by point, and after a few heart-wrenching plays, the Vikings won the third game, 29-27.

“We feel this confidence that we can do the part,” Desiderio said. “I think we were very smart on the last point; we applied very good strategy.”

Junior middle blocker Ashlyn Callan, who sat out during the last few volleyball matches for health reasons, rejoined the match last night. Also in the rotation was sophomore middle blocker Mia Gibbs, who performed impressively at the net with eight of kills during the match.

With renewed energy, the Vikings won the fourth set — and the match — with a final score of 25-20.

According to Athletic Director Therren Wilburn, the event was a success.

“It’s very lively in here,” Wilburn said. “We had great support from our parent groups and the whole athletic department.”

The Viking’s next league match is at 6:45 p.m. tomorrow at Monta Vista High School.