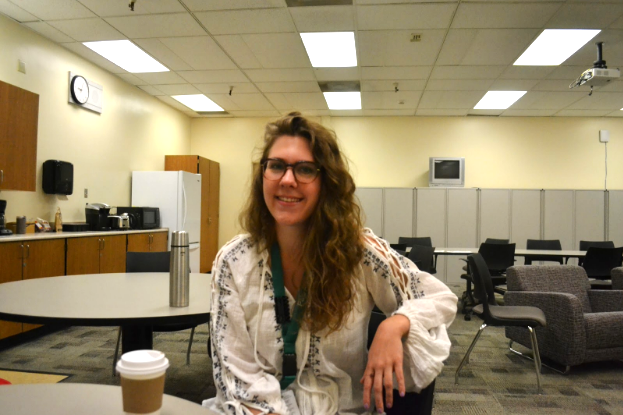 English teacher Lizzie DeKraai poses with her coffee in the English offices. Photo by Leila Chabane.

This is the 12th installment of Coffee Chats, where The Paly Voice gets to know staff members over a cup of coffee or tea.

The Paly Voice sat down with new English teacher Lizzie DeKraai to discuss her first impressions of Palo Alto High School and the experiences that have shaped her teaching style.

DeKraai is teaching one period of American Literature for juniors and three periods of English 9A for freshmen.

Before working at Paly, DeKraai worked as a substitute teacher.

“I was a long-term sub at JLS, teaching eighth grade, and then before that I was a sub just in the Palo Alto School District, random schools every day, and also at a school called Stanbridge Academy in San Mateo for students with special needs,” DeKraai said.

DeKraai has enjoyed her first few months at Paly and is impressed with the school’s beautiful campus and welcoming community.

“I’m originally from the Midwest, so it’s nice having this outdoor campus and all the palm trees,” DeKraai said. “It was just aesthetically beautiful … Everyone has been super welcoming and down-to-earth.”

Despite her positive first impressions of Paly, DeKraai was surprised by the level of stress and competition on campus.

“The pressure here is crazy, and I’ve never really been at a school where there’s so much competition coming from within the students,” DeKraai said. “Try to take it easy and relax … You don’t need to know what you’re going to do with the rest of your life right now.”

DeKraai’s decision to teach high school English was due to its complexity, from higher level texts to discussions that relate literature to current events.

Although she is passionate about teaching, when DeKraai was younger, she wanted to pursue a career in writing instead.

“What I wanted to be was a writer and an editor, but my family, they were like ‘nope, you won’t be able to make money doing that, publishing is dead, so you should try to become a teacher,’” DeKraai said. “I had already been tutoring, and I’m the oldest of five kids so I’d always been the homework helper and so I just tried it, and really enjoyed it.”

As a high school student at a conservative Catholic school in Kansas, DeKraai was an outspoken and disobedient student.

“When I was in high school I was rambunctious, and kind of spunky, and a brat,” DeKraai said. “I would talk back to my teachers … because I was frustrated that we weren’t really allowed to talk about or read the things that I was interested in.”

According to DeKraai, her high school experience has allowed her to better understand her students.

Along with her high school experience, DeKraai’s early years as a teacher have impacted the way she manages her classroom today.

According to DeKraai, her first job as a substitute teacher was a memorable learning experience. The third graders she was supposed to be teaching were throwing balls and covering themselves with mud. Lacking a lesson plan, DeKraai said she did not know how to deal with “30 crazy third graders.”

“That was a good lesson to learn, that I need to be prepared and have a backup plan in any situation,” DeKraai said.

Hyperactive third graders aside, DeKraai says she is truly at home in the classroom.

“I leave a class and I’m just buzzing and full of energy,” DeKraai said. “I really feed off that environment of a bunch of kids who are engaged and interested, and I love having discussions.”

Looking towards the future, DeKraai is enthusiastic for the year ahead, especially Spirit Week.

“I’m excited about Spirit Week. I’ve heard so much about it and I just don’t know what to expect, so I’m just looking forward to seeing it in action,” DeKraai said.