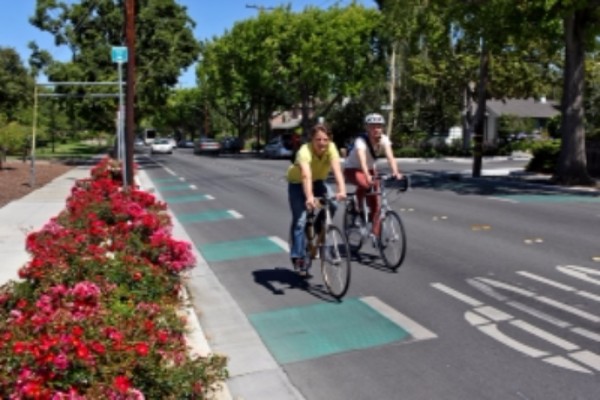 Bikers riding down a designated "bike boulevard" on Channing avenue. Bike Palo Alto hopes to raise awareness on how citizens can take advantage of the city's roads by bike. Photo credit: Michelle Le 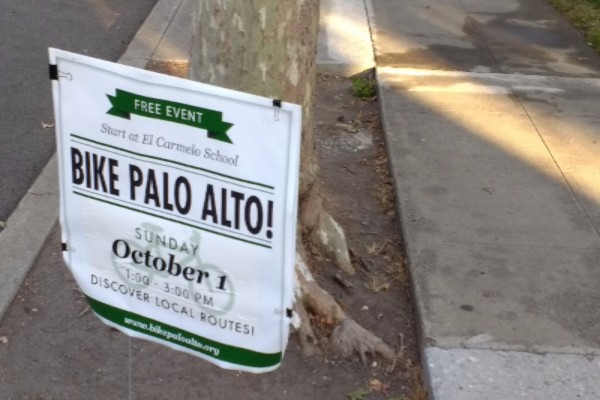 Signs, like this one at the intersection between North California Avenue and Bryant Street, advertise Bike Palo Alto, a biking event to encourage the use of bicycles to commute. Photo: Benjamin Huang

The eighth annual Bike Palo Alto, an event where attendees can explore Palo Alto’s roads via bike, will be from 1 p.m. to 3 p.m. on Sunday at El Carmelo Elementary School.

According to the Bike Palo Alto website, families will be able to bike along four pre-planned routes ranging from seven to 20 miles. The routes stretch from Menlo Park to the Palo Alto Baylands.

At the event, cyclists can also receive a map of convenient bike routes around Palo Alto and have their helmets fitted.

Cyclists can also refresh themselves along the way at special “treat stops” serving snacks. And with Bike Palo Alto’s Frequent Rider Card system, cyclists can record their visits to treat stops and local businesses on a card while biking and turn it in to receive a free T-shirt, as well as a chance to win a discount at several local restaurants.

According to volunteer Kathy Durham, Bike Palo Alto was originally organized by the Green Team, a group of citizens based in Barron Park who were concerned about climate change.

“You also have to [encourage people] in order to get people to think about changing how they get around,” Durham said. “You have to have some kind of encouragement event. Or rewards, people love that.”

According to volunteer Robert Neff, the event’s original purpose was to teach kids and their parents that riding their bikes around Palo Alto is a safe, viable alternative to driving a car.

According to Neff, Bike Palo Alto’s attendance has increased over the years. Last year, the event attracted over 800 people.

“We have something like 160 people signed up already, through the website, I think,” Neff said. “I think there’s a good chance [that we’ll have more people than last year], but we really won’t know until we get there. There have been years when we had to send people running off to xerox more copies of permission forms so that we could register more people so they could do the ride.”

According to the website, people looking to attend can preregister and download a waiver, which must be signed and turned in at the event.

“We have jobs at El Carmelo, which are around signing people in and signing permission slips and distributing maps and other things like that,” Neff said.  “People come in and you process them and out they go, and then we have jobs helping out at treat stops where we serve people snacks as they get there.”

“The weather should be nice, it should be a pretty good day for heading around Palo Alto,” Neff said.