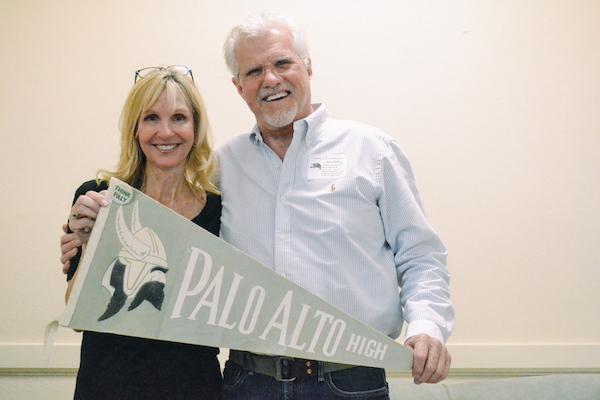 From the outside, Meredith Gyves and Jack Phillips look as though they have been good friends for a long while.

They laugh and tease each other as old friends do, while reminiscing about Palo Alto High School back in the 1960s. Although Paly is where they met, their relationship did not begin as a friendship, but rather as a student-teacher relationship. Gyves was a high school student, and Phillips was her English teacher senior year.

“We stayed in contact throughout my college years and I would come back to Paly to visit,” Gyves said. “When I was hired for my first job he was one of the first people I called.”

Gyves, the Paly and Gunn High School Work Experience teacher, is retiring this year after teaching for 45 years, the last 17 of which were at Paly. Gyves also attended Paly herself from 1966 to 1969.

Gyves said she chose to teach this last year of her career on the second floor of the Tower Building in Room 28, the same room in which Phillips inspired her to pursue education as a career.

“It was in this room that I decided I wanted to become a teacher,” Gyves said.

The Paly Voice sat down in this special room with both Gyves and Phillips to chat about Gyves’ high school experience, her love for Paly, and her plans for retirement.

As a student at Paly, Gyves was involved in extracurriculars from the social planning committee to the cheer team. She balanced after-school activities with challenging classes, and often sacrificed sleep to study.

“To this day, I’m an insomniac because I never went to bed,” Gyves said. “I had fun in high school, but I stayed up very late at night studying all the time.”

Aside from school and sports, Gyves had a wide circle of friends and a long-term boyfriend.

“I could have been Sandy in [the movie] ‘Grease’,” Gyves said. “I had a great boyfriend [who was] captain of the football team.”

Phillips said that although Gyves was a “dancy, bouncy, pom pom” girl who did not display a studious persona in high school, he recognized that she had intellect.

“Underneath all that … stuff was a brain, and I think maybe I recognized that and that’s what lit a fire in her,” Phillips said. “I think I saw that in her. The surface would not tell her that. She had a brain, and I just wanted her to use it.”

Though she had not yet decided on teaching as a career, even in high school, Gyves knew she wanted to give back to her community in the future.

“When I was in high school I wasn’t sure what I wanted to do,” Gyves said. “I thought I wanted to go into social work. I knew I wanted to work with people, do something kind. I felt like I had been given a lot growing up in Palo Alto.”

However, senior year in Mr. Phillips’ Shakespeare English class, Gyves began to realize her passion for English and teaching.

“He actually used to have me grade papers, as a punishment for talking in class,” Gyves said. “He said ‘You can do it, go ahead and put the grade on them.’ It not only empowered me, but it did something in me intuitively, that I thought, this is really what I want to do. It was in this room [Room 28] that I decided I wanted to become a teacher.”

After attending the University of Arizona to obtain both her bachelor’s degree in political science/anthropology and master’s degree in secondary education, Gyves worked in Arizona, Irvine, and Santa Rosa for a number of years teaching.

She has incorporated the values that her own teachers, like Phillips, have instilled in her into her own classroom.

She recounted confessing to Phillips that she had skipped his class to go to the beach one day. When Phillips asked why she did not lie about where she had been like her friends, Gyves said she wanted to tell the truth.

“I said ‘Well, why would I lie? That’s the truth’,” Gyves said. “He [Phillips] said ‘You can make up the test then, because you were honest.’ To this day I only have two rules in my class: be polite and be honest.”

Because of her love for Paly, Gyves returned to the Palo Alto area 17 years ago to finish her career.

“I wanted to finish my career in Palo Alto, so I came back here, and I was fortunate to get this perfect job working in the community and with the students,” Gyves said. “It will be really difficult to leave this year, but it’s time to pass the baton. My dream was to come back and teach at the high school that I attended.”

According to Gyves, her history at Paly, her love for teaching and the many memories of her friends and teachers will make it hard to leave.

“It’ll be so difficult to walk out the door, I get teary-eyed thinking about it right now,” Gyves said. “Every day is the last of something, and that’s hard, because I’m not leaving because I’m sick of it. I feel like I’ve been teaching five years, not 45. I love it.”

After the many years Gyves and Phillips have spent at Paly, both know of the stress that plagues students. Phillips, who worked as a guidance counselor at Paly before becoming a teacher, recognizes that Paly’s environment can take a toll on students.

“This is a pressure-cooker school,” Phillips said. “It’s one of the top schools in the nation, but the kids pay a price. You don’t get to be a kid.”

Despite the academic pressures, Gyves urges current students to make time for themselves in high school.

After Gyves retires, she plans to move out of Palo Alto, but still wants to maintain her connections to Paly.

“I bought a condo down in Carpinteria on the beach, which is near Santa Barbara,” Gyves said. “I’m starting a business with another person, we’re doing some consultant work. I’ll just be flying back up here because we’re doing things for student success.”

Gyves plans to help students with college readiness and the interview process as well as travel and spend more time with her daughter, who lives in Beverly Hills.

“She’s going back to the beach again,” Phillips said. “Talk about full circle.”