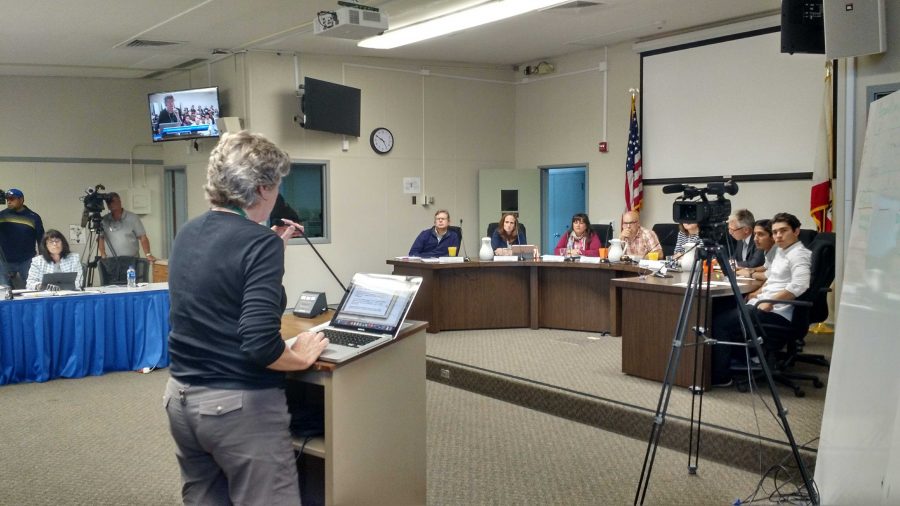 The Palo Alto High School administration may not be out of the woods yet, but observers at Thursday’s special board meeting could be forgiven if they thought the storm has passed for Principal Kimberly Diorio’s team after teachers and students showed up in force to defend their administration against charges that it mishandled a sexual assault case last year.

Out of the total of 23 speakers that came, 15 of them were staff from Paly. The speakers were led by two Paly students — senior Noga Hurwitz and junior Ciel Tracton — who both supported Diorio.

“[Diorio] made sure I felt safe and supported at school,” Tracton said. “The Paly world would be done without Kim.”

Hurwitz and Tracton were followed by equally passionate members of the Paly staff, all of whom supported the Diorio administration as well. Choir teacher Michael Najar, the instructional leader for the Visual and Performing Arts Department, complimented the administration’s ability to quickly react to the shortcomings of the lack of training by Palo Alto Unified School District’s Title IX coordinator.

“In absence of that specific training, I’m glad that we had administrators who acted quickly, with the best intentions,” Najar said.

During science teacher Josh Bloom’s comments, he requested all of Diorio supporters in the room to stand up. In a powerful display of solidarity, nearly the whole room rose.

Despite all the positive support, the administration is not in the clear yet. Not all community members were supporting of leaders in the district. Kathy Jordan, a Palo Alto parent, was one such person.

“It sounds like the staff is happy with her, but she didn’t take care of her students,” Jordan said in response to staff members who spoke out in favor of Diorio. “She didn’t comply with the law, and she’s not the only one.”

Another community member, Lynn Brown, posed a question during her comments to the school board: “Why is it that every time there’s a problem, a hiccup, a mistake, a misstep, there’s a witch hunt?”

Brown said she puts the blame on the board, but more specifically on trustees Todd Collins and Ken Dauber, whom she called out with a pointed finger.

These comments followed a brief review of the draft report released earlier this week from representatives Gina Maisto Smith and Leslie Gomez from law firm Cozen O’Connor. The report stated that the actions taken by administrators were inconsistent with the UCP (Uniform Complaint Procedure) and board policy.

Cozen O’Connor’s investigation concerned the Paly administration’s mishandling of an allegation of sexual assault in a Paly bathroom last year. In the draft report, the victim is mentioned as the Complainant.

Smith and Gomez also revealed the identities of Assistant Principals 1, 2 and 3 mentioned in the draft report. At the time, they were Vicky Kim, Jerry Berkson, and Kathie Laurence, respectively.

According to Gomez, when the Complainant in the alleged sexual assault case came out to an adult with her story, she was taken to the Wellness Center at Palo Alto High School. Next, the Complainant spoke with Assistant Principal Vicky Kim, who immediately referred the Complainant to Kim Diorio, who then went to Supt. Max McGee.

At the outset, the administration’s actions were “consistent with the requirements of Title IX, the Ed. Code, and the UCP… under the oversight of Vicky Kim,” according to Smith and Gomez.

McGee informed the board of the incident and asked the then-Title IX Coordinator, Holly Wade, if the district needed an investigation. Wade then deferred the situation to site administrators, which Smith and Gomez said was inconsistent with both Uniform Complaint Procedure and board policy.

According to Smith, Wade improperly evaluated the situation and failed to create a file. In addition, Diorio did not inform the Complainant about her procedural options either, contradicting the requirements of UCP.

Gomez added that when the Complainant decided to leave the district, Wade was asked once again if the school should offer UCP, but once again failed to take action.

“Staff draw on their own good intentions to make decisions that are often right and sometimes wrong,” Dauber said. “But it doesn’t guarantee students what they are entitled to under federal law.”

The board will vote on budget revisions at the next board meeting on Sept. 26.