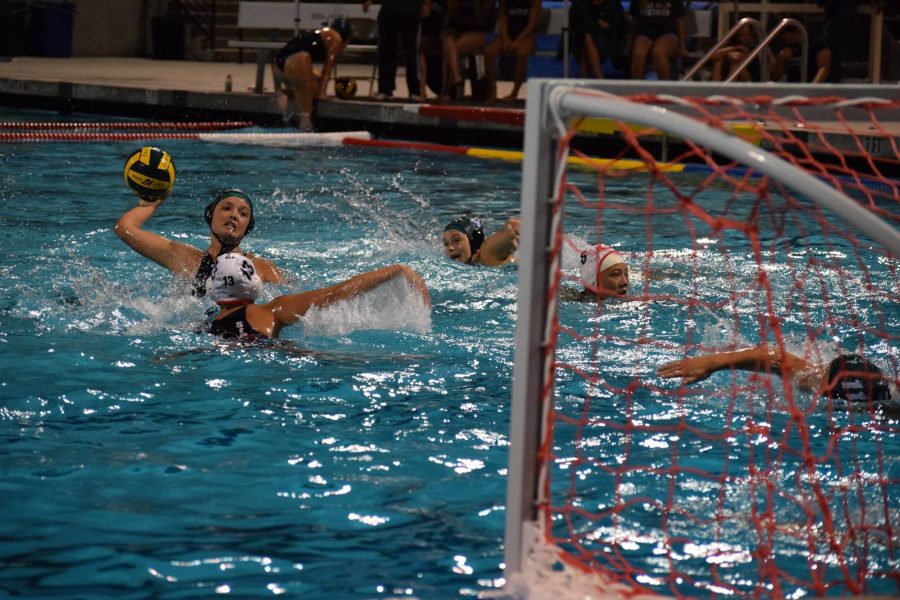 Senior Sabrina Hall looks to take a shot as the The Palo Alto High School Girls’ beat Gunn by a final score of 6-5 during the regular season of 2015. Photo by Chirag Akella.

According to Vikings’ junior returning starter Esme Stotland, games against Gunn have always been highly anticipated and it remains true for this year.

“We always look forward to playing Gunn,” Stotland said. “They’ve got a great team and it’ll be exciting to test ourselves.”

Through training and conditioning, the Vikings have added a list of new game tactics, both offensively and defensively.

“We’ve been working on getting over our hips to have quick reactions to counters since the summer,” senior returning starter Hollie Chiao said. “As a team, we’ve definitely become more adaptable to how other teams play; I’d say we’re prepared for anything.”

According to senior returning starter Sabrina Hall, the Vikings need to focus their attention on handling the Titans’ goalie, who is one of the best in the Bay Area.

“I think taking smart, well-placed shots is going to be the most important element of the game for us,” Hall said. “They may be a fast team, but we have been doing dry land and swim conditioning, so the team is feeling good about our strength in the water.”

All in all, the team is feeling optimistic about this game, according to Stotland.

“We have awesome, strong, and experienced senior leadership and everyone had been working extremely hard,” Stotland said. “I think we will really feed off of the energy from the rivalry and hopefully come out on top.”