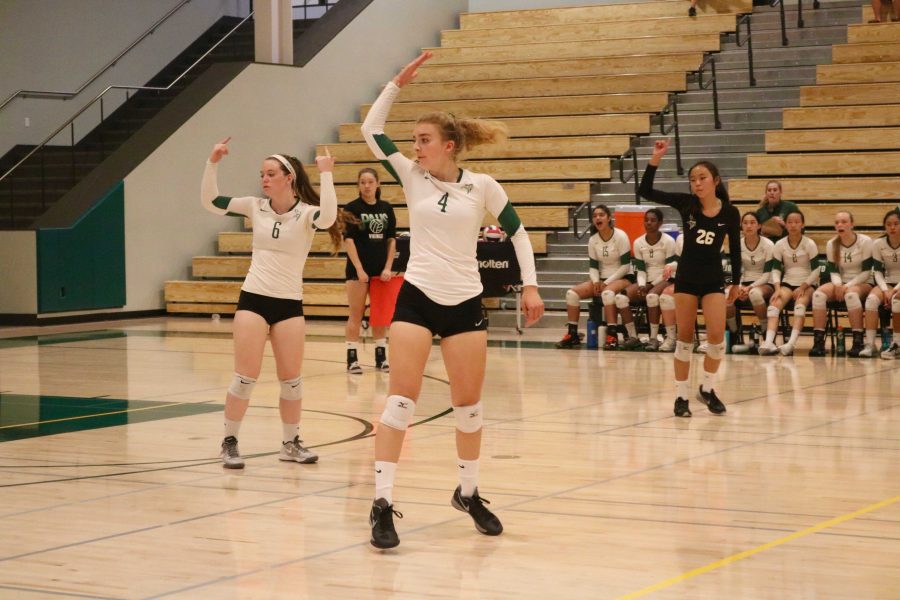 With nets up and bleachers out, the Peery Family Center will be ready for two home volleyball matches against private schools this week. Palo Alto High School (2-1, 0-0) will face St. Ignatius College Preparatory (6-0, 0-0) on Wednesday and Menlo School (5-2, 0-0) this Thursday.

Following their win against Gunn High School (0-5, 0-0) last week, the Vikings hope to maintain their momentum during the upcoming games. Junior outside hitter and defensive specialist Mallory Kuppe expects a great week of competition.

“I’m super excited for the games this week because both Menlo and St. Ignatius are very talented teams,” Kuppe said. “It’ll be interesting to see how we stack up against them.”

With St. Ignatius currently undefeated and ranked sixth in the state, according to MaxPreps, Wednesday’s match will provide a challenge for the Vikings. Senior libero and team captain Susanna Limb anticipates a good competition and feels the team is prepared.

“I think we have a really good chance of being competitive with both teams,” Limb said. “We’ve been working super hard at practices and putting in one hundred percent.”

Last year, Paly defeated Menlo School with a match score of 2-1 but lost to St. Ignatius in three sets. According to Limb, having the home court advantage this week could work in Paly’s favor.

“I’m looking forward to this week because we’re having two home games which will hopefully bring out a lot of fans,” Limb said.

The Vikings will take on St. Ignatius College Preparatory at 6:30 p.m. on Wednesday, Sept. 6, in the Peery Family Center, then battle Menlo School a day later at 6:30 p.m. on Thursday, Sept. 7, in the same location. Both matches will be home games offering free admission.