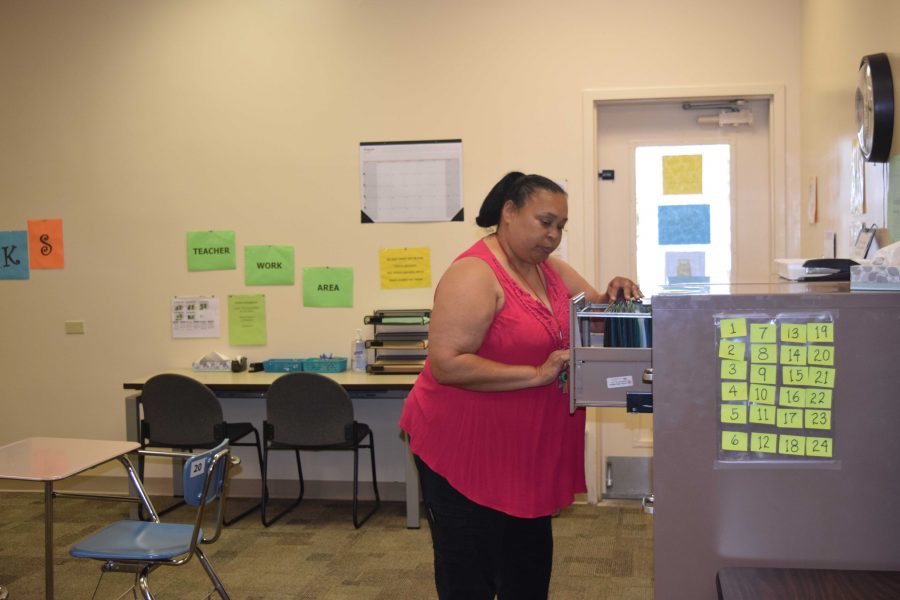 Testing Center Advisor Nadine Jefferson organizes files in the Testing Center, now located in the 700 building. According to Jefferson, the new room provides the space needed for the many students who use the center.

With Palo Alto High School’s new Peery Family Center in full use, the 700 and 400 buildings now house the testing center, the Special Education Department and the Peer Tutoring Center.

The Special Education Department, formerly located in the 300 building, has now moved to the 700 building, allowing the World Language Department to take over the 300 from the 400 building.

“The 700 building is now the special-ed department for 90% of it, and then we have the testing center [for the other 10%],” said Assistant Principal of Operations Jerry Berkson.

With the ongoing library construction, in addition to classrooms, the portables are now being used to house computer labs, books, and the Student Activities Office, thus moving the testing center from P7 to the 700 building. This move has had immediate effects on students who use the testing center, according to Testing Center Supervisor Nadine Jefferson.

“We have had a couple students, some making up things from last year that need to be taken care of,” Jefferson said. “I think that it will be a little quieter here than P7, because of lunch and brunch and that type of thing, it’s kind of hard to have everybody that’s out [for lunch] be quiet when we’re testing.”

The Peer Tutoring Center, formerly known as the Academic Resource Center, provides peer tutoring for all subjects and a quiet place to work. The program has had to move to room 408 as a result of the library construction.

According to Peer Tutoring Center Coordinator Maria Lim, the name changed from ARC to more accurately reflect the purpose of the program.

“The name Academic Resource Center was something that was given to the ARC many years ago when the testing center was in the ARC, and peer tutoring [as well],” Lim said.

The new location is significantly smaller than its previous one, which Lim believes may have an impact on students who take advantage of the Peer Tutoring Center’s student tutoring system.