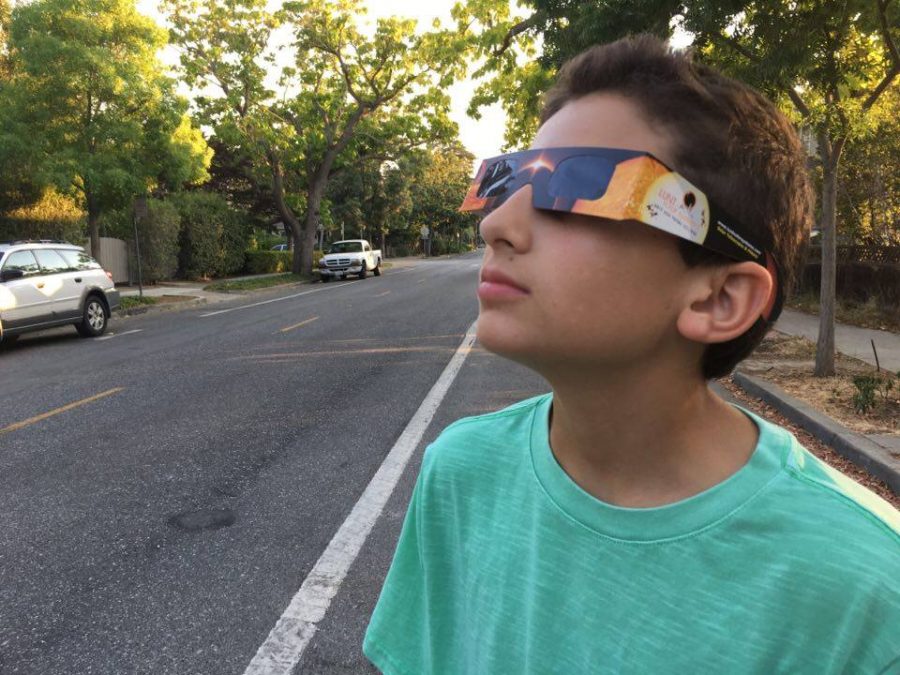 Some people may be blasé about advice given to them to not look directly at an eclipse, believing that it is just a myth that looking at an eclipse is dangerous. I’m here to refute that myth.

The much-anticipated solar eclipse on Aug. 21 has generated a lot of excitement from millions of people across the nation eager for a glimpse of the rare and spectacular event. In parts of the United States, the eclipse will be visible as a total solar eclipse, in which the moon will completely block the sun, leaving only the edges visible. While there will not be a total solar eclipse visible in Palo Alto, a partial solar eclipse will be visible from 9:01 a.m. to 11:37 a.m., with maximum coverage at 10:15 a.m. However, it is imperative that one be cautious while observing the eclipse, as it is dangerous to look at it with the naked eye.

Unfortunately, looking at an eclipse with the naked eye or even with regular sunglasses can permanently damage one’s eyes. I learned this at a young age, through a story that is woven into my family history; a story of my great-grandfather, who burned a hole in his retina by staring directly at a solar eclipse as a child. He did not know that his eye was damaged until he realized nothing was fixing his deteriorated vision, and visited an eye doctor.

My great-grandfather was Shantichand Khimchand Jhaveri, who was born in Mumbai, India sometime during 1918. We do not know how old he was when he saw the eclipse, and consequently cannot pinpoint the exact eclipse. However, it is very likely the damage happened in 1922, when a solar eclipse was visible in India.

His life was impacted forever as a result of his eye damage as his vision was only good out of one eye, and he could not see well out of the other.

When I first heard this story as a child, I was enraptured by it, but as I grew older, I was skeptical. Surely this was just a fable designed to prevent an eight-year-old from staring into the sun and then complaining. How could someone not realize that there was literally a hole in their eye? Wouldn’t the pain feel like staring into a laser?

However, research confirms that the effects of staring directly at an eclipse are indeed drastic and should not be underestimated. If you stand on the Palo Alto High School quad and look up at the eclipse, you are going to do permanent damage to your eyes. A condition called solar retinopathy results when an influx of sunlight over-stimulates cells that, in turn, release too many chemicals. This damages the retina, but is usually painless, according to multiple sources including the American Academy of Ophthalmology.

Solar retinopathy is not a prevalent condition because reflexes such as blinking, pupil contraction or turning away from the sun almost always occur when staring into a brilliant, bright sun. During a solar eclipse, however, the sun is covered, so people are much more likely to continually stare at it.

According to LiveScience.com, a science news website managed by the Purch Group, in only 30 to 60 seconds, a person can acquire permanent damage from staring at an eclipse with the naked eye. Doctors recount tales of patients with physical changes to their retinas as a result of the aforementioned actions. In particularly harrowing stories, patients have crescents burned in their retinas, and it is obvious where at the eclipse they were staring.

“Under no circumstances should anyone look directly at the sun during an eclipse without properly approved eye protection! Doing so may cause permanent eye damage,” Principal Kim Diorio emphasized in a Schoology post.

If you are interested in viewing the eclipse in an indirect manner, pinhole cameras can be made at home using a simple tutorial. They will show a projection of the sun and moon.

According to Gunn High School astrophysics teacher Heather Mellows, If you want to look directly at the sun, use solar-viewing glasses, which have lenses made of solar filters that are much darker than regular sunglasses. Ensure that you purchase glasses that are at the correct standard: ISO 12312-2. Lenses that are not up to standard may not offer sufficient protection against the possibility of solar retinopathy. Additionally, make sure your glasses do not have any holes or scratches.

“Telescopes and binoculars collect and focus even more light than your eye does, and therefore, looking through one without a solar filter will do even greater damage even faster,” Mellows said. “It is important that the solar filter be on the light receiving end of the telescope, you can’t just look through an unfiltered telescope with eclipse glasses on. Even when 75% of the sun is covered, as it will be from Palo Alto, there is still enough light to hurt you.”

After hearing what happened to my great-grandfather, I make sure to always use solar-grade tinted lenses when looking at an eclipse. Similarly to how your science teachers are sticklers for wearing goggles during a lab to protect your vision, you should be a stickler for wearing solar glasses when looking at the eclipse.

To view the eclipse, at school on Monday, head to the Paly Quad, where the Science Department is planning to set up telescopes with solar filters, solar binoculars, and solar glasses. If you are planning on watching the eclipse outside of school, make sure to bring your own sun protection with you.