The Future of Journalism: Ted Glasser 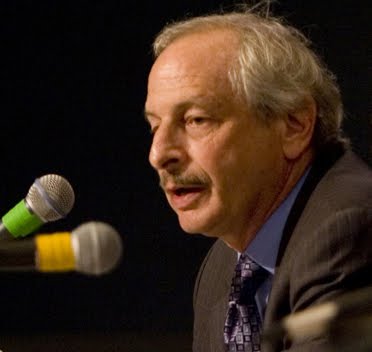 In a time when information is shared more frequently and with more people than ever before, how is media coverage changing along with our policies? The Paly Voice speaks with Stanford communications professor, Ted Glasser, to discuss the role of journalism, the future of free speech, first amendment rights, and how citizens can navigate the politically charged waters of the projected future.

“More than ever before, we need free and feisty journalism,” Stanford Communications professor Ted Glasser said.

Ted Glasser addresses a group of students and faculty at Stanford University.

Glasser’s teaching and research focuses on media practices and performance, with an emphasis on questions of press responsibility and accountability, according to his personal website, which links to the variety of projects and forums he is involved with to develop new strategies for navigating media ethics.

Glasser describes the type of influence presidents have on the media, and suggests that President Trump could inflict damage to citizens rights in the coming years.

“Presidents get to appoint the people who interpret and administer the law,” Glasser said. “In addition to appointing at least one Supreme Court justice, Trump gets to appoint the leaders of any number of commissions and other entities that deal with communication policy, including the Federal Communications Commission and the Federal Trade Commission. Formally and informally, Trump could do considerable damage to several rights – not just freedom of speech – protected by the First Amendment.”
Glasser is invested in media ethics conferences and projects, and believes that although journalism will evolve as society evolves, the function of journalism will remain as it is, unless First Amendment rights are threatened.

“The role and responsibilities of journalism remains the same,” Glasser said. “How they manifest themselves–how news is produced and consumed–has, of course, changed dramatically. Generally, I’m optimistic about the future of a free press. Still, we should be concerned about the power of any president–but especially Trump–to influence the scope and purpose of First Amendment rights.”

Glasser stresses the importance of ignoring allegations against the media by any political party, and instead encourages journalists and citizens to remain above it.

“Verify and justify facts and defend, publicly and candidly, your use and interpretation of those facts,” Glasser said. “ Ignore [allegations] and focus on journalism’s highest ideals  News media have been – and should continue to be – aggressive in their coverage of the Trump presidency.”

Glasser notes that the Trump administration regards the press as the opposition.

“They’re right,” Glasser said. “An oppositional press – an adversarial press – is a vitally important tradition in American politics. Public officials often dislike that role as it applies to them but at the same time they appreciate its importance.

As journalism continues to change with technology, political coverage becomes more direct as politicians have easier access to citizens through social media, according to Glasser.

“The new media landscape, brought about by the rapid computerization of communication in the 1990s, makes it easy for public officials, like Trump, to communicate directly with the public,” Glasser said. “But that in no way diminishes the job of the journalist, which is to create and sustain the public conversations democracy demands.”