The Paly Voice breaks down: The Cost of Prom 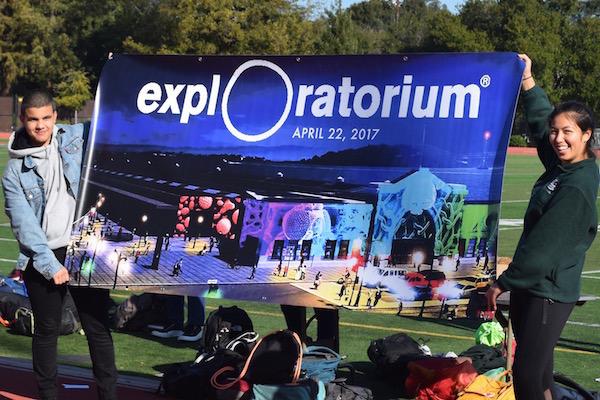 Palo Alto High School’s Associated Student Body spent $117,890 on 2017 Prom, according to invoices provided by Student Activities Director Matthew Hall. The biggest costs were food for $65,007 ($89 per person) and the rental of the Exploratorium at $31,390 ($43 per person).

Prom brought in $87,000 in revenue, according to Paly ASB minutes. Part of the deficit was a result of lower-than-expected attendance. Only 730 people attended Prom this year, compared to 764 last year, according to Hall. Food and buses were ordered to accommodate 900 people. However, two of the buses were canceled at the last moment, giving a $2,000 credit for the next year.

As a result, Paly spent $163 per ticket, even though tickets sold for $115 early bird and $135 regular admission. The deficit was covered by Stanford Parking funds, money from parking permits, and five fundraisers hosted by ASB in partnership with local businesses, according to Hall.

A direct mailer fundraiser to junior and senior parents solicited donations to subsidize 37 tickets for students who could not afford the cost of Prom, according to Hall.

The regular admission ticket price was up $10 from last year, but the early bird price remained the same.

Senior Vice President Natalie Maloney planned many of the elements of Prom, including the location. Maloney attributed the high cost to a large variety of food and lack of catering flexibility.

“Since the city [of San Francisco] owns the Exploratorium, they require us to order food through a certain catering company which makes it more expensive so we have very little control over the price and what food we can order but we did our best,” Maloney said. “We didn’t know the exact cost until Ami [Peterson, the Prom planner] got back to us after we selected the food we wanted.”

Peterson reiterated that the expense was normal.

“The building’s policy is that they only have a few preferred caterers that can serve the venue. The cost of food is pretty standard. The San Francisco caterers have to pay a $5 per person fee, based on city law so yes, $88 per person on food is about average.”

According to Peterson, she first sent a menu to ASB, which made some minor changes, approved it, and then sent it back. She then worked to find an appropriate caterer and sent the estimated cost figures back to ASB for the final approval.

Martin Rock, the associate director of communications for the Exploratorium, maintains that people who use the venue have reasonable flexibility to control price, although the venue does tack on extra fees.

“We have a list of 12 approved caterers at a range of price-points. It is not at all uncommon for event spaces — in San Francisco and otherwise — to provide a list of approved caterers and most event organizers find that 12 is more than enough,” Rock said. “The Exploratorium does charge a base rental fee and a $10 per person guest service fee for staffing needs.”

Noga Hurwitz, who is the senior class president for the next school year and therefore responsible for planning Prom in 2018, stressed that she will seek to cut costs for next year’s Prom attendees.

“One of our biggest aspirations for next year’s Prom is to make it more accessible for all students by lowering the cost. This will be accomplished through more ASB fundraisers to subsidize back end costs like venue and DJ, but also by bringing back events like the Prom dress swap to reduce those personal “optional” expenses that make the day extra special,” Hurwitz said.