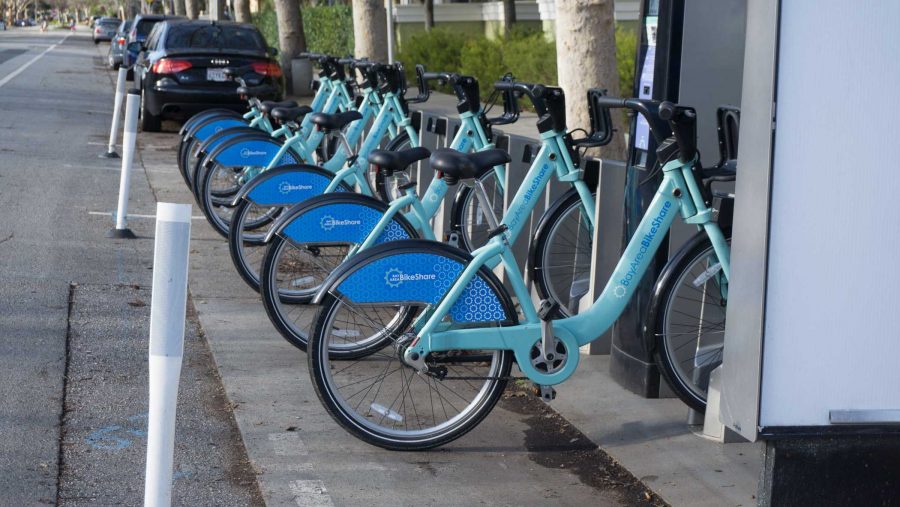 Did you know it is illegal to bike with both earbuds in? Have you ever biked across a crosswalk?

Biking to and from Palo Alto High School can be hectic, with roads filled with rushing students, parent and commuters. Just during the morning rush hour from 7:30 to 8:30 a.m., approximately 300 student bicyclists and 40 student pedestrians commute to school, according to the City of Palo Alto Transportation staff.

Amid the chaos, biking can potentially be dangerous, especially during high-traffic hours, though abiding by the City of Palo Alto’s regulations can help to reduce dangers.

“I’ve written hundreds of tickets to bicyclists,” Palo Alto Police Sergeant Ken Kratt said. “When I stop a bicycle it’s because they were doing something unsafe.”

Read on for basic information on important laws that apply to everyday student bikers, including some you may not have even known existed.

Anyone under the age of 18 is required by law to wear a helmet, according to the City of Palo Alto website. For skateboards, scooters, roller blades or anything that moves with wheels, helmets are a requirement for minors.

2. Not biking on a crosswalk

According to Kratt, not biking on a crosswalk is one of the most commonly disobeyed laws pertaining to bicyclists.

3. Biking on the right side of the road

According to Kratt, like walking a bike across a crosswalk, this is another commonly disobeyed law.

“Take a little extra time when you’re riding home or riding to school and stop at the stop signs and ride on the right side of the road,” Kratt said. “In the afternoon when kids are leaving down Churchill from the school, they’re all on the wrong side of the road when they cross Alma Street. Every single one of them could be getting a ticket.”

According to the California Vehicle Code 27400, wearing two earbuds at once is illegal for both bicyclists and car drivers.

“When you have earbuds in, you’re really forcing a lot of the sound that is coming from the music into your ears, so it makes it harder to hear [cars and pedestrians],” Kratt said.

Additionally, there is a limit to the level at which music may be played. If a police officer can hear a car’s audio from 50 feet away, the driver will receive a ticket.

At night, bicyclists are required by law to have a front white light, according to the State of California Department of Motor Vehicles. Additionally, bikers must have a red reflector in the back, and white or yellow reflectors on the foot pedals or ankles.

7. Biking and using a cellphone

8. Biking with at least one hand

With this overview of commonly disobeyed bike laws, The Paly Voice hopes student bicyclists can commute safely to and from school.