The Paly Voice • May 3, 2017 • https://palyvoice.com/131219/opinion/prom-provides-festive-experience-despite-disorganization/ 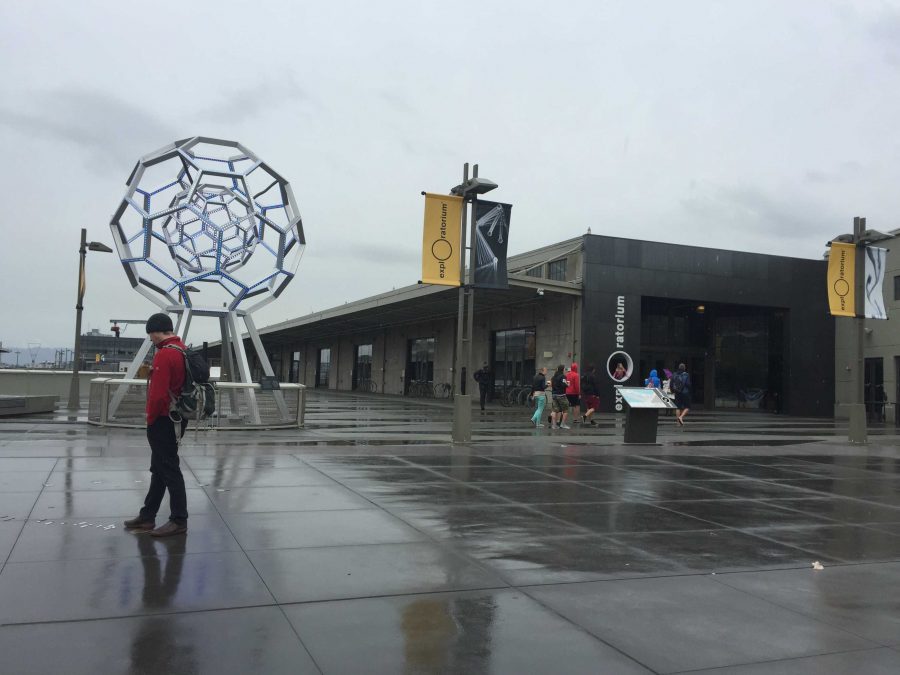 After a smashing success at last year’s Prom in the Design Galleria, Palo Alto High School Associated Student Body and administration aimed to replicate their past triumph at the Exploratorium in San Francisco on April 22. While the experience dazzled students with pleasant bay views, diverse music selections and fascinating exhibits, the night fell short in part because of sparse seating arrangements and a lack of organization when it came to food.

The Exploratorium was an odd venue to host Prom, although the outdoor seating and exhibits were interesting touches. Entering the building felt like walking into a maze due to the roped off areas, scattered exhibits and construction workers walking across the balconies above. While the Exploratorium had more ground space than last year’s Galleria, it lacked the accessible overhead balconies that were popular last year.

Despite being odd in some ways, the Exploratorium provided outdoor seating with panoramic views of Coit Tower, the Bay Bridge and Downtown San Francisco—unlike at the Galleria where students were limited to the interior complex. After dancing on the hot, loud dance floor, students could fully relax on outdoor rocking chairs and the cold sea air, along with the quiet atmosphere, were both refreshing touches.

The venue’s scientific exhibits also provided a breath of fresh air from dancing. Scattered around the museum, experiments included bouncing magnets, light bulbs illuminated by bicycle gears and a balancing teeter-totter. An unorthodox Prom feature, the experiments made the night more unique and memorable.

The especially disappointing aspect of the venue was the lack of tables and chairs throughout the building. Many resorted to eating their dinners while standing or on small stools meant for sitting at the exhibits. It was also much more difficult to eat and socialize with friends with basically no seating room. Furthermore, the complex did not have a natural dance floor or stage. As a result, the dance floor was placed seemingly randomly and was exposed at three sides, making dancing somewhat awkward.

Boogieing and jumping to “Jump” by Kris Kross would not be possible without the upbeat and popular music DJ Hightop provided. Students immediately felt the energetic atmosphere while entering the large venue’s dance floor.  Students danced to the beats of artists ranging from Sharika to Travis Scott. Thanks to DJ Hightop’s playlist of requests given to him in advance and during prom, the popular and groovy music and DJ Hightop himself allowed everyone to come together and enjoy a night without school or work on their minds. However, not everyone was aware of the ability to request different songs, making some attendees feel as though they had missed out on such an important feature.

Throughout the night, dates and friend groups slow-danced to Ed Sheeran’s “Thinking Out Loud” and John Legend’s “All of Me.” As the night grew closer to an end, conga lines began to disperse, but DJ Hightop’s energetic dancing kept the party going. Whether the music was upbeat or slow, DJ Hightop had a dance move for it. Toward the end of the night, everyone was singing along and getting low to “Apple Bottom Jeans” by Flo Rida, bringing everyone together regardless of who they came with. While searching for fresh air outside, students could still hear the music penetrating from inside.

By the end of the night, DJ Hightop had announced that he would be playing one last song, causing each group to prepare for Prom’s finale. Due to the catchy songs DJ Hightop had provided throughout Prom, the last song turned out to be a disappointment to many. Both fast and slow paced, each group had gone from happily dancing to frantically trying to find the next beat. Not only was the beat confusing, the song was not well known. While it is impossible to please everyone, DJ Hightop’s energetic dancing and popular upbeat music made everyone’s Prom experience feel more like a Prom extravaganza.

While the food at Prom was tasty and easy to eat, the overall organization was chaotic. Immediately after arriving to the Exploratorium, large groups of hungry juniors and seniors engulfed the venue, awaiting the pasta and mini pizzas station. Luckily, to the right of this large blob of teenagers was a stack of delicious looking mini donuts. After students found their places in the somewhat long and chaotic line, students picked up paper plates as the pasta, mini pizzas, and nacho station called out to each attendee.

Furthermore, the savory spread of “chow mein” and “Asian meatballs” tasted more like one’s old leftovers. Prior to Prom, rumors had spread hyping up this so-called Asian food station but unfortunately, the chow mein and Asian meatballs were mediocre.

After dancing to Abba and dougieing to “Teach Me How To Dougie” by Cali Swag District, one’s quest for a cool-down treat began. Whether one was craving a refreshing cup of ice cream or aiming to satisfy their chocolate craze, the caterers were prepared. Two Ben & Jerry’s ice cream stations were placed near the dance floor, making the post-dancing cool-down process accessible to everyone. Each ice cream station ranged from strawberry in a bowl to chocolate chip cookie dough in a cone. A stack of brownies garnished with powdered sugar overwhelmed the room with its rich chocolaty flavor.

Throughout the night, students could get seconds, if not thirds, of every food option, making the initial chaotic line acceptable. By the end of the night, mini pizzas and pasta plates were being packed up early due to the overestimated number of guests. Instead of packing up the food up early, the caterers could have packed mini to-go boxes in order to satisfy each attendee and not waste any food. While the food organization should improve in the future, by the end of the night, students left Prom with their stomachs full, still raving about the ice cream stations.

The transportation to and from the Exploratorium was an experience to say the least. The buses were comfortable, air conditioned and provided a nice space for friends to get even more hyped up before arriving at Prom. The ride was only around 45 minutes and along the way, beautiful views of the bay and San Francisco added to the excitement of the destination.

Similar to last year, students were told to arrive at Paly at 5:30 p.m. even though the buses didn’t begin to leave for around 45 minutes. Despite the long wait, the time provided students with a perfect opportunity to take pictures with their friends and tell everyone they knew how nice they looked.

Once students were lined up at their buses, the chaperones were efficient at checking them in and loading them in a timely matter. Some buses left around 6:15 p.m., however, the students on the later ones had to stay to board until around 7:00 p.m., causing them to miss the ability to explore the venue before huge crowds entered. Delicious fruit snacks and water were available in the front of the buses, aiding those who were slightly hungry before having to wait in the long lines to the food bars.

By the end of the night, huge crowds of tired students left the building and stood in a mass on the end of the sidewalk, despite the chilly temperature. Buses pulled up one by one, and as soon as their doors opened, students would swarm the narrow opening. People eager to get home began shoving towards the first buses, causing those in the middle of the crowds to be pushed around and dates or friends to be separated from one another. The only adults helping in the beginning was the chaperones in the front of each bus.

While the wait for the buses was manageable, the process of boarding at the end of the night was chaotic and could have been more organized so students didn’t need to push or stand waiting outside in the freezing night.

This year’s Prom is considered to be a 7.5/10 for its dazzling views, interactive exhibits, range of music, exceptional DJ and memorable sweets, despite the lack of tables or stage, disappointing finale, unorganized food lines, and stressful transportation at the end of the night.