Girls’ lacrosse seeks to bounce back in rival game 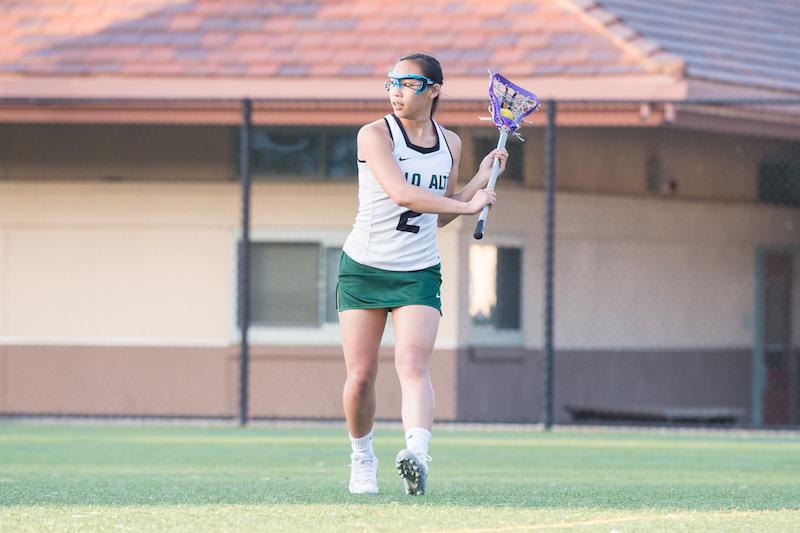 Senior captain Kaitlin Chiu surveys the field for an open teammate in the first half of the game against Los Gatos High school on April 14 at home. The Vikings lost in overtime 7-6.

Midway through the first half in a rivalry game against Gunn High School on March 28, it looked bleak for the Palo Alto High School girls’ lacrosse team. The offense hadn’t been able to put much pressure on the Titan’s suffocating defense and subsequently was down 3-1. However, in a flash, the Vikings scored 4 goals and took a 5-4 lead into halftime en route to a 10-7 victory.

The second-place Vikings (10-6, 10-2), who are second-place overall in the De Anna League, hope to replicate that winning performance today as they look to put some distance between them and the third-place Gunn Titans (12-4, 10-3) in the De Anza league overall.

According to senior captain Kaitlin Chiu, the Vikings analyzed and learned how to counter Gunn’s zone defense for today’s match at 7:30 p.m. at Gunn.

“Last game it took us awhile to really get in the game and to figure out how to break their zone defense,” Chiu said. “Once we got that sorted out, we just played our game. We made sure to possess the ball on attack and instead of trying to take 1-on-1’s to goal, we executed some plays to help offset the zone defense, leaving space for someone to drive and shoot or drive and pass to someone else to shoot.”

With another important game coming up, the Vikings have been practicing even harder, according to sophomore defender Teagan Felt.

“As a team, I think we have gone really hard at practice for these last few weeks, for not only Gunn, but our other big rivals as well,” Felt said. “We have started to consistently push each other and go our hardest each practice, knowing that it will make all of us better. We also have watched a lot of film to see what we can improve on.”

According to sophomore midfielder Abby Ramsey, the Vikings need to play as a team in order to succeed tomorrow.

“I think it’s more important we play as a team and work together to take down Gunn,” Ramsey said. “If we can connect together we’ll get the ball and things will go our way. It’s all mental.”

Chiu said that the team has used its recent practices and past games against Gunn to come up with a defensive plan to slow down Gunn’s talented attacking players.

“We’ve focused a lot on how to defend against Gunn because we’ve identified their strongest players, and we’ve developed a type of defense that will help us shut them down,” Chiu said. “So some of our defenders including Katie Cox, Maddie Hare, Lia Salvatierra, and Abby Ramsey will have to step up for us on defense. [Goalie] Mattie Orloff, as always, will bring the heat tomorrow.”

Felt said she looks forward to every rivalry game against Gunn as she believes they force the team to play at a higher level in an exciting atmosphere.

“I think having a cross-town rival is really cool,” Felt said. “It honestly pushes us to want to become that much better, so we can prove we are the strongest team in Palo Alto. We also get a lot more fans at our Gunn games, which always makes the game more exciting.”

Chiu is expecting a tough game against a team that lost in a tight match to the De Anza League leader, Los Gatos High School.

“Gunn just lost to Los Gatos on Tuesday in triple overtime, so we know that they are hungry for a victory,” Chiu said. “We know that they will be coming after us hard, and we are ready to go hard right back at them.”