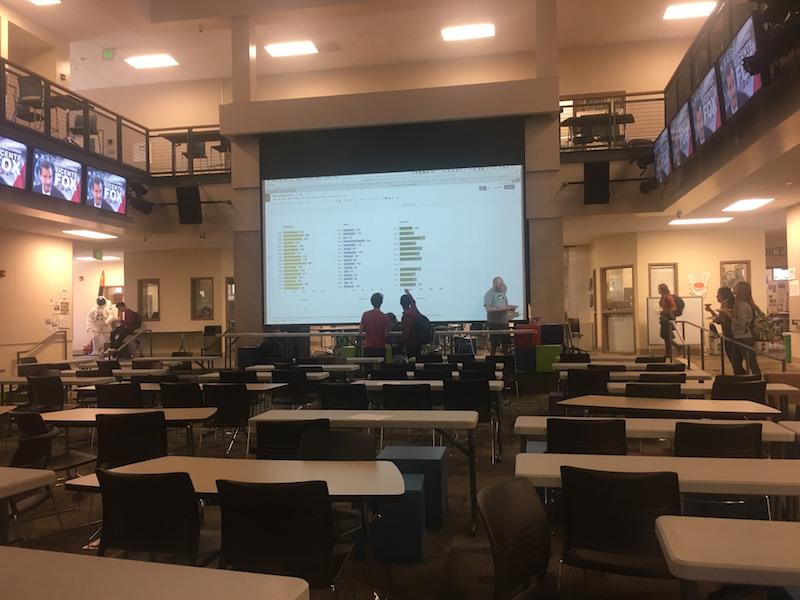 “I was super happy to see how excited the hundreds of students were to do math,” math teacher David Baker said. “It is cool because events like these bring the class together as a team. It was a review activity that we were able to make into a really fun experience. I definitely think it went really well, considering it was the first time we ran it.”

According to math teacher Herb Bocksnick, the Calc Bowl was a way to take the monotony out of Advanced Placement review for students.

“Each group of students [worked] on four calculus questions at a time and [ran] up to a teacher and submitted the problems as they completed them,” AB Calculus teacher Herb Bocksnick said. “The teachers and I graded the cards with the answers on them as they came in, and each group’s score [was] reflected on a live scoring spreadsheet up on the projector.”

According to Bocksnick, the winning group will receive custom t-shirts. In addition, students will be able to purchase team t-shirts here, regardless of whether or not they won, up until March 24.

Students found participating in the Calc Bowl was a good way to start preparing for the AB Calculus final and Advanced Placement exam, according to senior Aman Mittal.

“The Calc Bowl not only gave me a chance to learn and collaborate with my peers, but it also helped me understand what I really need to study and focus on for the upcoming final and AP test,” Mittal said. “Overall, I thought it was a great experience. I was surprised by the amount of students that showed up and although the entire thing didn’t count for much, I loved the competitive, hustling atmosphere.”

Kwan said she initially signed up to participate in the Calc Bowl for the extra credit and free pizza, but ended up enjoying participating in the competition.

“I never expected that my team would win, and I’m really glad I participated because I found out I still remembered a lot of Calculus,” Kwan said. “Our strategy was to find the hardest question, skip it, and have each person pick one of the other three questions. Once we finished the three questions, we would go back to the hard one and try to solve it. if took too long, we turned it in as our one blank question and got two points.”

According to Baker, a few changes might be made for next year’s Calc Bowl.

“Because of the super attendance we weren’t able to keep up with the live grading, so next for next year we need to somehow come up with a way to get more graders or slow the pace down for people running up,” Baker said. “It would also be cool to expand it to more classes besides AB Calculus.”