The Paly Voice • May 3, 2017 • https://palyvoice.com/130983/news/paly-to-introduce-boys-volleyball-discussing-addition-of-girls-field-hockey/ 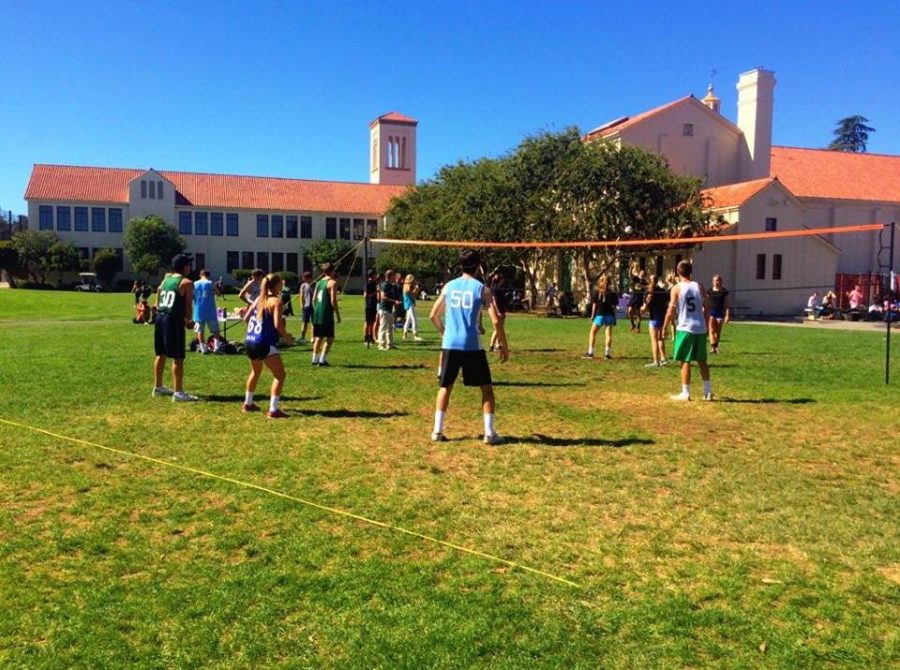 Two teams face off in the 2015 intramural volleyball

The Palo Alto High School Athletic Department is looking to introduce boys’ volleyball in the spring of 2018 and girls’ field hockey for the fall of 2018. The hiring process for coaches is already underway with organizational meetings having begun in early January, according to newly appointed Athletic Director Therren Wilburn.

According to Wilburn, there needs to be an equal number of girls’ sports teams as boys’ sports teams. The introduction of boys’ volleyball and girls’ field hockey is in accordance to Title IX, which is a federal law that states that no person in the US shall be excluded from the participation and benefits of sports, on the basis of gender, under any education program or activity receiving Federal financial assistance.

As a result, to balance the number of boys’ and girls’ sports, girls’ field hockey is up for discussion and passionate parents and students have begun a petition to promote the addition of the new sport. However, the most prominent challenge of adding field hockey is the availability of field space. Girls’ field hockey would be a fall sport, and it must be on turf for safety reasons, according to Wilburn.

“Boy’s volleyball is [happening],” Wilburn said. “ We were looking at bringing girls’ field hockey, but we have to make sure we have enough field space for it. It [girls’ field hockey] is a fall sport, and being that we don’t have turf on our baseball field, we’re going to need extra space for them to play. [There would be] no room if they had a game.”

The introduction of boy’s volleyball coincides with the Northern California Volleyball Association’s  launching of the MOTOR-MVB: the Making Opportunities & Transforming Our Reach for Boys’ and Men’s Volleyball, which is an initiative to develop a state-wide growth of boys’ and mens’ volleyball. According to the official NCVA webpage, NCVA is looking to move volleyball away from its reputation of being a primarily female sport. Instead, NCVA is promoting the sport as a means for boys and men to pursue a less concussive athletic pathway without compromising the rigor and excitement on the court. Paly is in line with the growing trend of boys’ volleyball, which is picking up in high schools across the nation. Most recently school districts in Tracy, Oregon, and Colorado have been involved in the promotion and establishment of boys’ volleyball as official high school sports.

According to the NCVA site, there are currently 2,442 high schools and 54,418 boys in 22 states that sanction high school boys’ volleyball. NCVA strives to identify influences and make advocacy a priority in California, and they believe more athletic opportunities in college will encourage more high schools to add teams for boys.

Boys’ volleyball has been gaining popularity in the Central Coast Section division, yet both Paly and Gunn high school are the only schools in the Santa Clara Valley Athletic League that do not currently have boys’ volleyball teams.

“There are a lot of people interested in starting to play boys’ volleyball, so it’s a growing sport in the area,” Wilburn said. “That’s why it’s coming about. [CCS] has been asking us to look into it. Kids have been coming in the last two years asking about [adding boys’ volleyball].”

As decisions and planning continue, the next year will witness many changes to the athletic department.