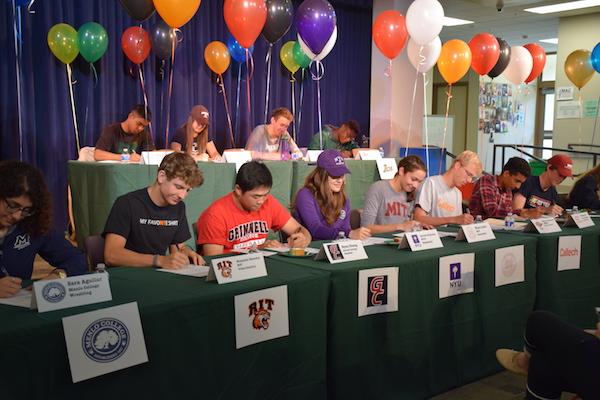 Fourteen seniors at Paly affirmed their intent to continue their athletics in college in the MAC today.

Vividly-colored balloons and college gear were on full display as Palo Alto High School honored 14 seniors who will continue playing their sports at the collegiate level, during a signing day ceremony at lunch today in the Media Arts Center.

This ceremony comes after Paly hosted an official National Signing Day event in February, in which 18 students signed their letters of intent to play in college. The event today celebrated students who received more recent notification of their acceptance to the college that they intend to play at, or who had not yet committed to a college at the time of the first signing day.

According to Paly Sports Boosters president Melissa Anderson, in the future Paly will host only one signing day, later in the school year, to accommodate all student athletes.

Paly athletic director Kathy Bowers praised the athletes for their dedication to their sports throughout the years.

“We are very proud of the rich tradition we have of Paly students playing at the next level,” Bowers said. “Signing Day is the culmination of many days of hard work. They [the athletes] have to sacrifice, they have to put aside things on Friday nights to focus on school because they’ve been practicing all week.”

“I think that it’s really nice to be rewarded for all the work I’ve put in these four years,” said Pai, who will be competing for Carnegie Mellon, of the signing day ceremony. “I wasn’t really thinking about college when I was training, but I think it’s great that it paid off in the end.”

While he’s relishing his accomplishments, Pai is already looking to the future of his athletic career.

“Carnegie Mellon’s team is really fast and it’ll be really fun to train and push my limits there,” he said.