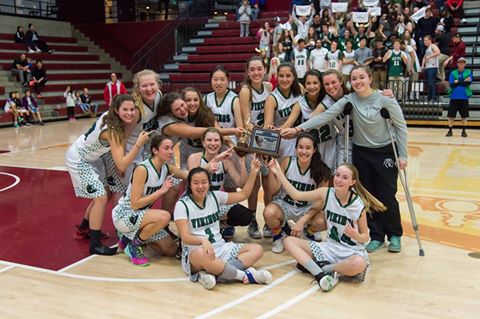 Going into the second half of the Central Coast Section Division I girls championship match, the Palo Alto High School girls’ basketball team (22-3, 12-0) was hanging on by a thread, with only a one point lead against the Los Gatos High School Wildcats (21-6, 9-3).

As the Paly student section began to file in, and as the “defense” chants grew louder at the beginning of the third quarter, the Vikings fed off of the energy of the students, and stumped the Cats defensively, holding them to only five points in the quarter, which proved to be the turning point in their 52-41 victory.

“It was a very important game for us since we wanted to defend our title and beat Gatos,” senior guard Lauren Koyama said. “After halftime, only being up by one, our team knew we needed a change of pace. I decided to be more aggressive, and when I saw an opportunity, I took it. Thankfully, it worked out.”

Seniors Koyama and forward Maya Lathi led the team in scoring, with 16 and 11 points respectively.

“My biggest job on the team is to get offensive rebounds, so if I’m at the basket after a shot it gives me opportunities for second chance points,” Lathi said. “This game I tried to play fearlessly from the perimeter and I think it paid off.”
However, the game wasn’t won by scoring. The Vikings held the Wildcats to under ten points in two quarters in one of their strongest defensive performances this season.

“Our gameplan was to deny Korie Seandel and Josie Despars, because they are the biggest scoring threats,” Lathi said. “We stuck to that in the first half but gave those defenders some extra help by leaving a player open.”

The Vikings captured their second straight CCS championship, and look to continue their success against Lincoln High School at 7 p.m. on Wednesday in Stockton in the first round of state playoffs