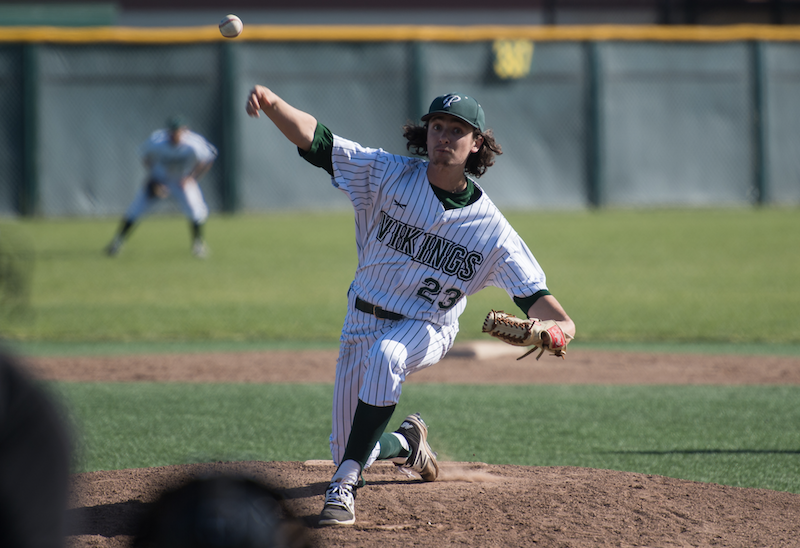 During a successful, 3-0, week for the Paly squad, the Vikings added two more wins to its undefeated league record, securing first place in the DAL over Los Gatos.

Junior third baseman Niko Lillios and senior shortstop Ethan Stern aided to the wins of the Vikings this week.

Lillios maintained a .500 batting average along with a combined five RBI’s between the Viking’s last two games. Lillios also made quality defensive plays in the infield.

“Clinching league takes a little pressure off us,” Lillios said. “Hopefully we can play a little looser and keep getting wins.”

Stern held a 1.000 fielding percentage and hit .500 over the Friday and Saturday matches.

“Although we have clinched league, we can’t let up,” Stern said. “We need to keep working in practice and keep grinding through the regular season.”

Friday’s matchup against Los Gatos was named the “Game of the Week” by GetSportsFocused, a local sports media organization.

Aron Ecoff was the starting pitcher for the Vikings, and Lillios stepped behind the mound to close for Paly after continuous solid play in the infield.

The Vikings beat the Wildcats, 7-3, scoring five runs in the bottom of the second inning.

On Saturday, the Vikings demolished the Leland Chargers, winning 11-2.

According to Lillios, the Vikings need to improve on its first inning focus, as the team made two back to back defensive errors in the top of the first.

“We played great and came out strong hitting,” Lillios said. “We were a little sloppy on defense at first, but we tightened it up at the end of the game.”

Junior second baseman Max Jung-Goldberg, the lead-off hitter for the Vikings, hit a powerful home run in the bottom of the first inning against the Chargers.

“We need to play clean baseball all seven [innings] to pick up the wins,” Jung-Goldberg said. “It feels awesome [clinching the league title]. Getting it done early was really important rather than having it be down to the final few games of the season.”

“That’s our third three-win week in the past five, so it’s given us a lot of momentum going into Mountain View next week,” Jung-Golberg said. “League playoffs are coming up soon so we’re building up strong for that.”