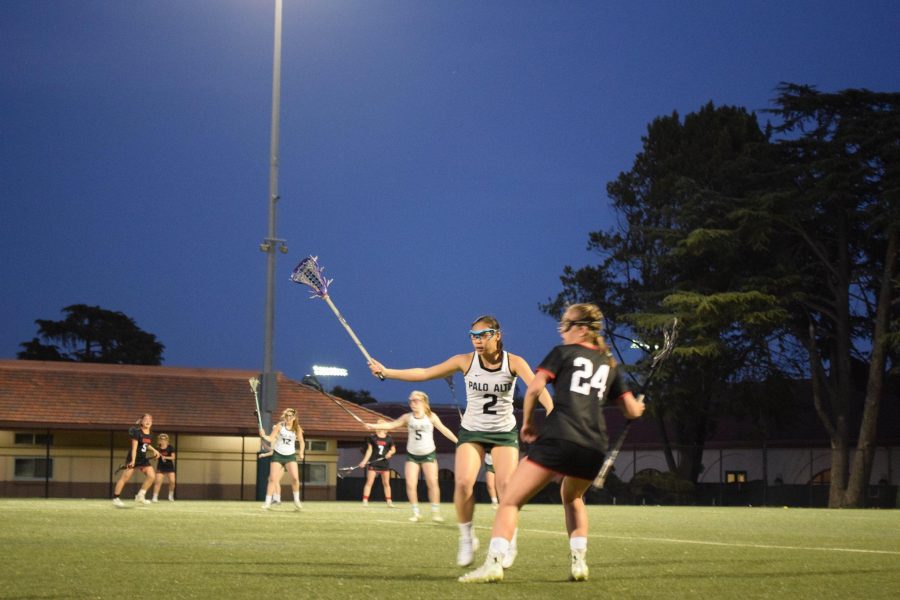 Senior captain Kaitlin Chiu looks to defend as the ball comes her way. The Vikings aims to avenge its loss to Los Gatos at 7 p.m. tomorrow at home. Photo by Jackson Doerr.

For an athlete, outside of winning a championship, there is no better feeling than avenging a tough defeat to a close rival with a win.

The loss was the Vikings’ first of their league schedule and dropped them to second place behind Los Gatos in the De Anza league.

According to sophomore Sydney Schwan, while the loss was disappointing, it has spurred the Vikings to prepare even harder for its next game against Los Gatos.

“Losing our first league game was definitely hard on our team because Los Gatos is such a big rival,”  Schwan said. “But I think this has only pushed us harder and made us more hungry for a win which has really impacted how we play in practice now.”

According to senior captain Kaitlin Chiu, the Vikings players also endured disrespectful comments directed at players from Los Gatos fans. Chiu said that the Vikings can avenge their defeat by being mentally strong, something they have worked on and talked about this week.

“We’ve all agreed that we must be mentally prepared for a tough game on Friday, so we decided that we are going to take a few minutes before warm-ups to think about what we have to do individually in order to be successful,” Chiu said. “The only way to better ourselves and better our teammates is to challenge one another during practice.”

Schwan said that the Vikings need to play with intensity in order to achieve further success this season.

“This season is going to be tough; there are a lot of teams where we have beaten them by large margins but we tend to get in our heads a little,” Schwan said. “But I do think we are one of the best teams in our league and I think this season will end well for us and hopefully we will finish number one in SCVALs again this year.”

Chiu said that the team is excited to get a chance to play Los Gatos again and are looking forward to tomorrow.

“We are so excited that we get to play them again tomorrow because we are still so fired up after what happened,” Chiu said. “We definitely will be bringing the heat tomorrow.”