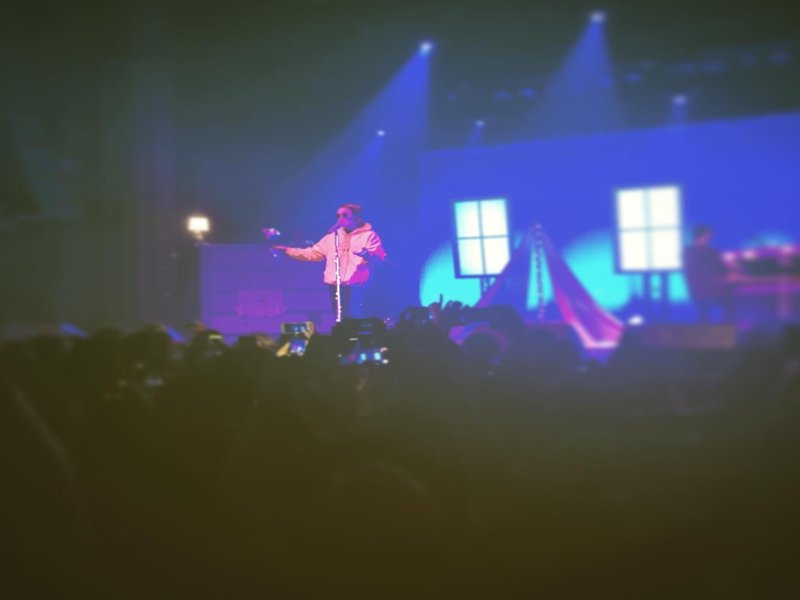 Music and sound surround the world every day. Whether that be the tapping of a pencil on a desk, or a marching band playing loud and proud. There is something about live music that is unique. It has an impact on the soul and the heart that can only be felt by going to a concert. It is especially powerful if you have followed that particular artist or band for a long time. You know all the words to every song and you hope they play that one song that has been stuck in your head the week before, in anticipation.

All this and more was going was going through my head last month when attended the energetic kick-off of rising alternative pop artist Gnash’s “Sleepover” tour at the Regency Ballroom in San Francisco.

The opening acts were Triangle Park with myboyjon, Tulpa & Blankets, Wreen, Imad Royal, MAX and Sweater beats, in that order. They played a variety of songs, some faster and some slower, and the audience enjoyed each performance, dancing and singing along.

Gnash is a California native. He was born in Los Angeles and has spent a lot of his recording time there. He is not a very popular artist yet, but he is on the rise in the industry and could become a household name in future years.

The stage set up consisted of a small bedroom. There was a bookshelf on the far right of the stage, with a small desk lamp on top, with a piano on the opposite side. In the middle of the stage he had a big tent or fort that children make when having a sleepover. This is where he entered the stage for his opening song. The background was the night sky, with the stars and moon, which wrapped up the environment quite nicely.

When Gnash came out, the crowd erupted. He got them involved right from his first song. He talked about how he went around San Francisco that day and how beautiful it is. He was having the time of his life. Singing is his passion and it showed.

He sang some of his most popular song such as, “i hate u i love u,” “home,” and “tell me it’s okay.” He also played new music he is working on for the future. He had an interesting contrast of slow and fast paced songs.

He knew how to work an audience and overall, after everything I had been through to get to the concert, I was glad to be there. His words made me think, too, that these artist are real, with real struggles. Hearing them puts everything into perspective.

Concerts aren’t a waste of money and energy. They create a pathway that connects with the individual and the artist. The songs they sing and the words they speak could have a huge impact on someone’s life and that is why live music can have so much more influence than recorded music.

The memory of this night will be etched in my mind forever, his live music is another puzzle piece that makes up the moments of my life.

Thanks, Gnash and friends. I’ll be back for more memories.