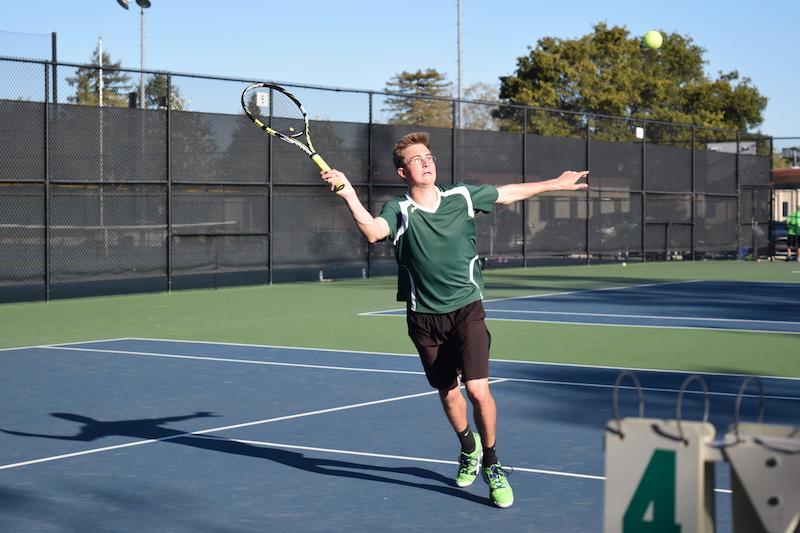 Senior Adrian Smith hits the ball during a match last season. The Vikings main goal this upcoming season is to stay in the uppermost league. Photo: Sam Lee.

After a lackluster 2016 season, the Palo Alto High School boys’ tennis team is determined to make up for lost talent with an aggressive showing in the 2017 season.

According to head coach Andy Harader, the team is going to have to come together to fill the void left by last year’s seniors, Carl Goodfriend, Shiv Matta and Drew Embersits, who accounted for many of the team’s victories last year. Senior co-captain Noah Galper and senior co-captain Henry Badger are expected to fill these vacancies.

“I had to step up last year and play varsity one and varsity two singles because our top two players kept getting injured, so I’m much more prepared to step up to that role this year,” Galper said. “It’s hard to set high expectations for this season right now because we’re in such a tough league but I’m looking forward to seeing how we perform.”

The Vikings showed promise in their first preseason match, defeating Aragon High School on Wednesday. According to Galper, this victory is a morale boost for the team, which is crucial to Paly’s success against tougher opponents such as its cross-town rival, the Gunn High School Titans.

“We won our match yesterday [against Aragon] pretty decisively and we’re going into our next match, against Gunn, strong,” Galper said. “In the past few years Gunn has beaten us because they had a couple really strong players but they’ve graduated so now we have high hopes.”

According to Galper, the team’s main goals this season are to maintain its position in the uppermost Santa Clara Valley Athletic League and win at the California High School Boys Tennis Classic Tournament in Fresno next week.

According to Harader, the toughest matchups of the season will be against Monta Vista High School and Saratoga High School. Harader says the Vikings will have to work hard if they want to stand a chance against these teams.

“Monta Vista High School and Saratoga High School have always been the top dogs,” Harader said. “We can always play our best and come as close as we can, but the chances of us beating them are pretty slim.”

The Vikings will play the Titans at 3:30 p.m. today at Gunn High School.