Two-person play ‘Constellations’ to be showcased at Gunn 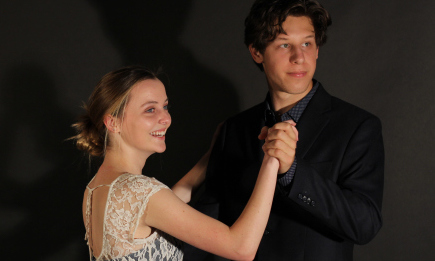 The drama has a cast of only two actors: Paly senior Zoe Sego, and Gunn senior Sam Hyrkin. Another Gunn senior, Nicolas Borbolla, is the director of the play. According to Sego, other Paly theater members recommended her for the role and after meeting with the director, she knew she wanted to participate in the play.

“Because the cast is so small, we have all gotten really close,” Sego said.

“Constellations,”, written by Nick Payne, was released on Broadway in 2015. The drama follows the lives of a theoretical physicist and a beekeeper and how their relationship could progress in different parallel universes, according to Sego.

The high school cast began rehearsing for this performance in December. Rehearsal consists of several hours of practicing lines, polishing subtext and running blocking. According to Sego, running lines for this specific play required more time due to the two-person cast.

“It has been really rewarding to see all the hard work we put into a piece of art,” Sego said. “We are all really proud of [it].”

The play will be performed in Gunn’s theater and admission is free for everyone.

“People should come to watch it because it’s a beautifully written and powerful show,” Sego said. “And coming would support both [Gunn and Paly].”