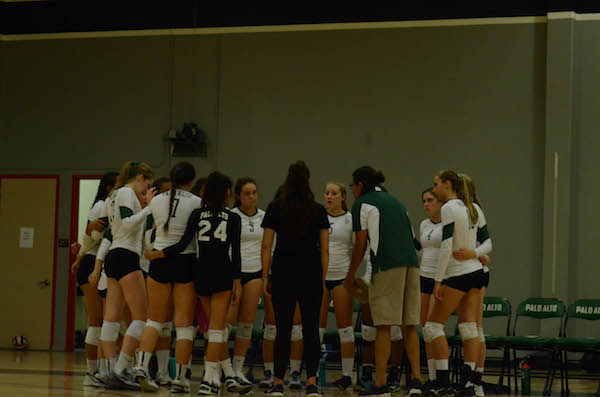 Two monumental changes are coming to the Palo Alto High School volleyball program in the spring season of 2018. A new coach will take charge of the girls varsity team, and the vikings await the possibility that a boys team will be added.

Former coach Jekara Wilson led the junior varsity team for an outstanding total of nine years, and she suddenly departed from the program after her second year coaching the varsity team.

Although Athletic Director Kathi Bowers declined to comment on the reason for Wilson’s departure, student athletes who played on her varsity team reacted to the loss of their coach.

According to junior Chelsea Fan, who played under Wilson for 2 years, the coach was a dedicated coach who made a lasting impact on the entire volleyball program.

“She’s always been very passionate about volleyball and she always looked out for the volleyball program as a whole instead of only focusing on the varsity team that she coached,” Fan said.

Although the team is not sure who its new coach will be, Fan said the team is hoping for a knowledgable and passionate replacement.

The next season may also be a historic year for the volleyball program. According to Bowers, the athletic department recommended to the district that boys’ volleyball be added as a spring sport next year.

“We [the athletic department] have made a recommendation to the district,” Bowers said. “We are waiting to add boys’ volleyball as a sport for the spring of 2018 at both schools [Paly and Gunn].”

According to Bowers, upon approving the recommendation the focus will shift to finding a coach for the team.

“Once we have approval from the district, they will support the coaching stipend,” Bowers said. “Then they become under our umbrella and we would then advertise for and hire a coach.”