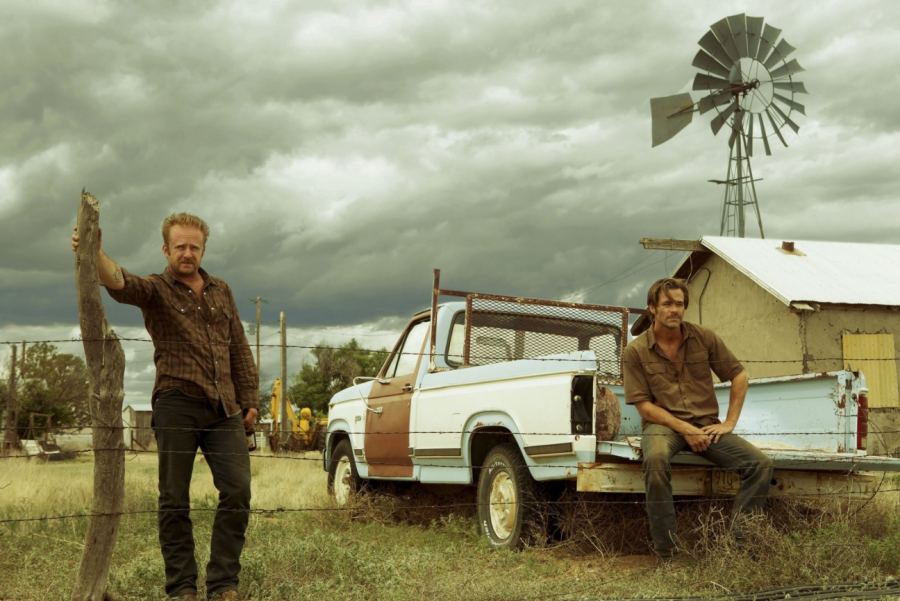 David MacKenzie’s "Hell or High Water" follows brothers Tanner (left) and Toby Howard (right) through a series of bank robberies in a final effort to save their estate from looming foreclosure. The film is nominated for four academy award including Best Motion Picture of the Year, Best Performance by an Actor in a Supporting Role, Best Writing, Original Screenplay, and Best Achievement in Film Editing. Photo: The Oscars Official Website.

To the average moviegoer, director David MacKenzie’s neo-western crime thriller, “Hell or High Water,” released last summer, may seem like an ordinary western cowboy movie. However, within the first few minutes of the film, audiences are soon exposed to a world of poverty and forgotten ghost towns, where people are driven to crime to survive.

MacKenzie masterfully brings to life the work of Oscar-nominated writer, Taylor Sheridan, recounting the age-old tale of two outlawed brothers building a life in the harsh Wild West. “Hell or High Water” brings something distinctively different than the classic western tale; it delves into the discussion of rising bank foreclosures and touches on the injustices carried out against Native Americans.

“Hell or High Water” follows two brothers, Toby (Chris Pine) and Tanner Howard (Ben Foster), and their less-than-ethical journey to keep their estate. Mackenzie’s exemplary use of character development has viewers rooting for the outlaws in spite of their felonies.

The audiance would not expect much action from the opening scene, as a small blue car rolls down the streets of a washed-out rural Texan town. But in the blink of an eye viewers are transported to the center of the Howard brothers’ first heist. Somehow, their apparent inexperience is almost endearing.

Viewers are then introduced to two Texas Rangers, Marcus Hamilton (Jeff Bridges) and Alberto Parker (Gil Birmingham), who have been assigned to investigate the brothers’ crimes. Hamilton, who is close to retirement, is eager to take on his one last case. Nominated for an Oscar as “Best Supporting Actor,” Bridges brings Hamilton’s internal struggle to the forefront, grappling with his impending departure from the police force. His partner, Parker, as half-Mexican and half-Native American, deals with his mixed-race identity while also shedding light on the injustices American Indians faced. Together, they piece together evidence and testimonies to locate their criminals.

In a movie filled with shootouts and armed robberies, Sheridan diffuses tense moments with the right balance of humor, avoiding slapstick jokes but rather utilizing playful interactions between characters to break the tension. When building these tense scenes, MacKenzie masterfully crafts the scenery and music to fit the mood. In one such scene, when Toby attempts to pass a security screening as an injured and wanted man, it is deafeningly silent with the exception of distant crickets in the fields chirping and the sounds of Howard’s breathing. The only movement in the scene comes from outside the car, where the police officers check Howard’s paperwork as he struggles to cover up his gaping bullet wound.

Sheridan’s work would not have been fully realized without the outstanding performances by leads Pine, Howard, and Bridges, who truly bring their characters to life. Pine effectively portrays Toby Howard as the soft-spoken younger brother, too often swept up in his older brother’s endeavors. Foster perfectly complements Pine as Tanner Howard, the troubled yet lovable older brother who can never quite make the right decision. The bond between the two brothers is a constant throughout the movie, with both actors embodying their roles and making their story believable, leaving the audience with no choice other than to cheer them on as they rob bank after bank. Bridges gives an excellent performance as well, flawlessly realizing the inner turmoil faced by Marcus Hamilton and his looming retirement on screen.

Perhaps the most impressive aspect of the film is that, while viewers feel a strange allegiance to the felons of the movie, the sheriffs tracking them down never come off as villains either; the story line is more complicated than a simple showdown of good versus evil. Rarely is there a movie that truly presents a situation where at times, you are unsure of which side is in the right — and the accomplishment of this feat can be crediting again to superb acting and noteworthy writing.

Aside from the basic story line which is entertaining in itself, Sheridan manages to weave in elements of social and political commentary that perk the ears of more thoughtful viewers. While there are no good or evil characters, there is one clear villain — the banks — as they attempt to take advantage of people stuck in the cyclical nature of poverty. As for Toby, he attempts to break the cycle of poverty for his estranged sons as he fights to keep the bank from foreclosing their family ranch.

Additionally, while viewers may have come for a movie about Western cowboys, Sheridan does not allow them to forget that the great Wild West fables came at the expense of the lives of millions Native Americans. In a potent scene, Tanner Howard jokingly calls an Indian “lord of the plains” to which the man solemnly responds, “lords of nothing now.” With that quick quip, the audience is reminded about the loss of native land, their reservations turned into casinos and tourist destinations.

“Hell or High Water,” while a mediocre cowboy movie on its own, is transformed into a greater film through its complex characters and greater social commentary. An enjoyable action film with a relatively short run time, this movie is a superb film to catch before the 89th Academy Awards go live.

Rated: R for some strong violence, language throughout and brief sexuality