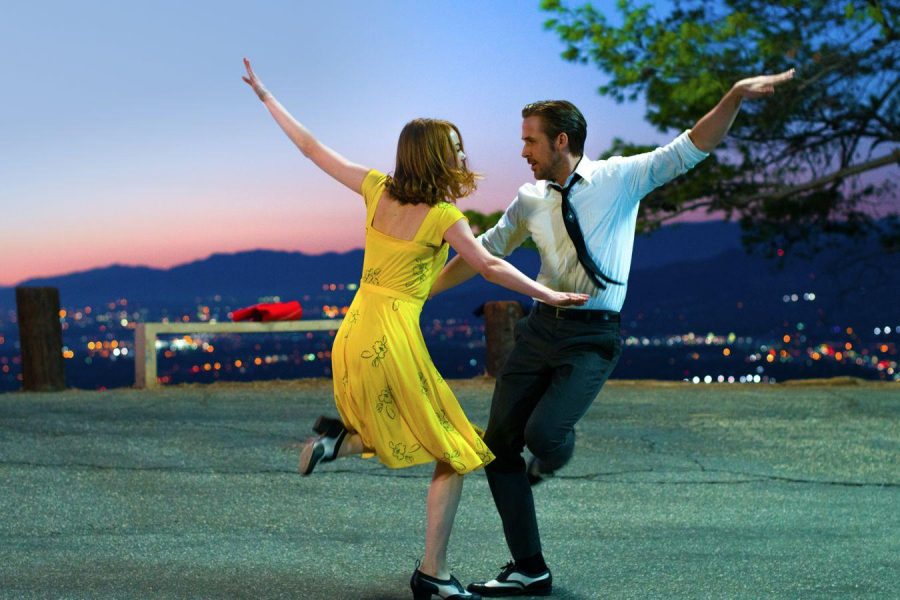 Music, dancing and Ryan Gosling; what could be better? The movie “La La Land”—a musical up for a Best Picture Oscar—combines all three of these aspects in a romantic-drama about two hopeless idealists who cross paths and immediately strike a connection.

The opening scenes set the playful tone of the movie with a normal day on a Los Angeles highway with lines of traffic clogging the roads. Cars honking and people yelling quickly turn into the opening number, “Another Day of Sun.” This is the first time Sebastian Wilder (Ryan Gosling) and Mia Dolan (Emma Stone) interact in a misunderstood act of road-rage due to the insufferable Los Angeles traffic. Wilder is a struggling jazz musician and Dolan an aspiring actress. As they continue to see one another around town, soon, mutual annoyance gives way to an indisputable romantic connection.

Their days take them across Los Angeles: serving coffee in Warner Bros. Studios, tap dancing on top of Mt. Hollywood Drive, watching a film inside the Rialto Theatre, floating in the Griffith Observatory, singing on the Colorado Street Bridge and more, making the setting romantic and endearing.

The musical brings the essence of jazz to the present day with the aptly-named “Mia and Sebastian’s Theme” which follows the two around wherever they go, and variations of it arise depending on the tone of the scene, from romance to heartbreak. Other standout numbers include “Someone in the Crowd,” “City of Stars” and “A Lovely Night.” John Legend, who is the closest rendition of an antagonist the film has, performs “Start A Fire” with a lackluster Gosling following on piano. The film adeptly mixes traditional musical numbers with subtler music that fits with the plot; for instance, “Audition” starts as Dolan telling a story and then transitions into song.

The cinematography is engaging as the audience watches Dolan and Wilder fall hopelessly in love; the feeling is captured perfectly as they float into the air in the starry Griffith observatory dancing to “Mia and Sebastian’s Theme.” Creating dramatic effects with an emotional feeling makes the audience fall deeper in love with the idea of Mia and Sebastian falling deeper into each others’ arms.

The costumes are simple; Dolan wears exclusively cheery colors and sweet silhouettes. Wilder’s are almost boring enough to take no notice of — except for his two-toned dancing shoes. Their outfits have a retro feel though remain modern enough to fit in with the contemporary Los Angeles scenery.

Gosling and Stone previously acted together in “Crazy, Stupid, Love” and “Gangster Squad.” They encompass their respective characters perfectly and have great on-screen chemistry. While Stone’s singing is mediocre at best and Gosling’s unmemorable, the charm of the movie manages to mask it.

The dialogue is snappy and witty, which keeps the relationship between the duo spirited and engaging.

They epitomize the ideal couple until their lives begin to fall apart and their jobs drive each away from the other. As their careers increasingly take hold of their lives, they attempt to sustain their relationship with the changing times. The ending ultimately has the audience questioning the role of ambition versus love.

Ultimately, the choice is between love for a person and love for a career. Although, it is arguable that Dolan and Wilder are not pursuing a career, but they’re pursuing their passion.

“La La Land” is nominated for 14 Oscars and previously won seven Golden Globes along with 140 other awards.

Rated PG13 for some language