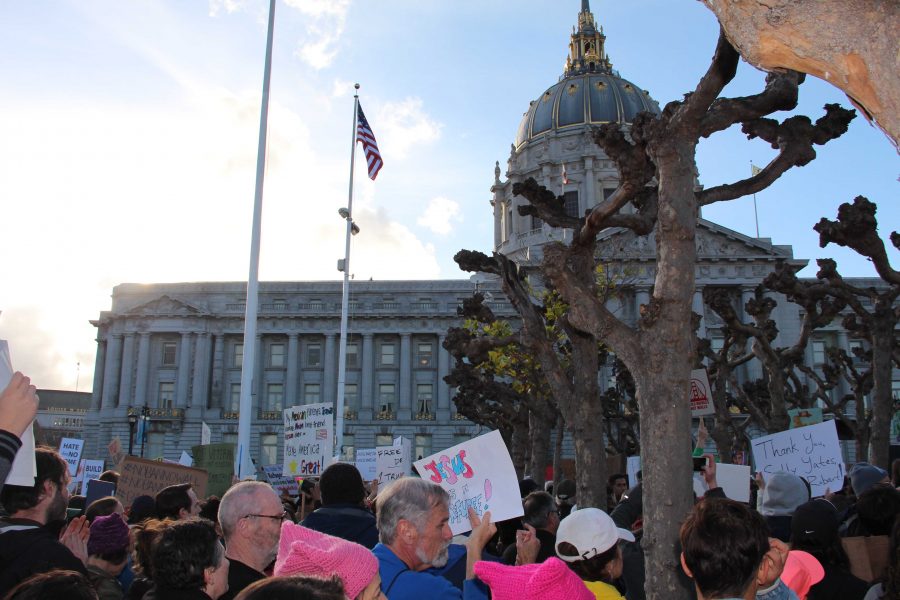 The 8000 – 9000 attendant protest, officially titled #NoBanNoWall,  embodies the newfound will of liberal Americans to come out in numbers to aggressively counteract President Donald Trump’s controversial agenda. For many, the vitriol of these protests is reminiscent of the Tea Party movement, where enraged conservatives became outspoken in fighting and resisting former President Barack Obama’s first term policy goals.

This protest centered around Trump’s recent executive actions, which include a travel ban on seven Muslim-majority countries and leaked documents and campaign rhetoric that recommend directing federal funds toward a border wall.

The travel ban’s implementation has been especially controversial because it has left scores of green card and visa holders locked out of the country. Many of the speakers and organizers had personal experiences with family members being unable to apply for visas or return.

“My family members who were currently in the process of applying for visas are not able to do so under the ban,” Camilia Razavi, who was the original organizer, said.

The signs at the protest, among the most colorful and humorous, tended to center around the antagonism of some conservatives and the celebration of others. Trump and Chief Strategist Steve Bannon were among the most common negatively viewed subjects with former Attorney General Sally Yates and Judge James Robart being championed as friends of the cause.

The protest came on the back of Robart temporarily striking down the ban, allowing previously blocked people to arrive without incident.

While the protest was generally tempered and calm, the crowd erupted in loud roars when the head of the Norcal branch of the ACLU defiantly stated “Mr. Trump, we will see you in court”

Many other speakers took the stage, including an Ethiopian refugee, an Iranian political asylum seeker and former U.S representative Mike Honda.

The speakers consistently stressed how they fled a life of persecution and danger to come to America, leavingtheir family for a land they saw filled with acceptance and opportunity. Others encouraged Trump not to make the same mistakes that the U.S had when Jews fled Germany and were turned away at the border.

“If we remain vigilant, if we remain strong, if we remain together, it won’t happen again,” Honda stated.
The rally came on the back of airport protests earlier in the week that called for releasing refugees and green card holders detained. 1,000 people showed up to the second day of protests at SFO, according to CBS Bay Area.

Many of the speakers stressed the importance of a broader resistance movement.
“Will you be part of this movement not just today, but every day?,” one speaker stressed.

Organizers of the protest intend to organize future resistance and have started a Facebook group called “NoBanNoWall” to alert protestors of future events. A follow-up to the women’s march called “A Day without Women” where women will strike work is planned for next week.”