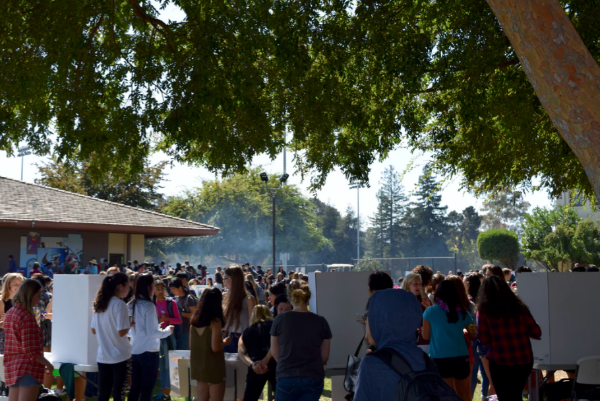 With second semester’s Club Day coming up tomorrow, students will be looking to join clubs, but may not know of the new clubs offered on campus in 2017. Read more to find out which clubs are new to Palo Alto High School and why you should sign up and get involved.

Club president junior Keahi Asing says that “R.O.C.K. stands for “Reach Out. Care. Know,” and is dedicated to mental health awareness and advocacy.

“We want to build a strong community that supports itself, and ROCK focuses on educating kids like us on peer counseling so that we are all prepared if a friend, or anyone really, comes to us needing help,” Asing said.

According to club co-president junior Sarah Shader, the club will focus on two aspects in regards to nature: preservation and appreciation.

“My friend [and club co-president junior] Julie [Cornfield] and I realized that there wasn’t an environmental club this year like there’s been in past years, and so we decided we wanted to start our own,” Shader said.

Shader says the club will gather in and out of school.

“We’re going to do things like go on hikes and picnics, learn about how to cook food when you’re camping, get wilderness first-aid certified, and [more]. Also, [we will] do activities [in] environmental awareness and activism, like organizing events at Paly, putting up posters, volunteering at Acterra, going to beach cleanups, [and more].”

Club president junior Maddy McNee says that this new club hopes to turn beach volleyball into an official Paly varsity sport in the future, and that making a club is the first step to getting there.

“Because it is quite a process to create a sport at Paly, we had to initiate it as a club which may then turn into an actual sport next year if it ends up being approved by the Board [of Education] and other administrators,” McNee said. “We do have Kathy Laurence helping us with the club right now and she is very involved in helping us with the process.”

The team will practice regularly and compete in local tournaments, according to McNee.

“We will be competing with others schools in the area and the winner of our league will have the opportunity to travel to Southern California to compete with schools there,” McNee said. “This will act as an alternative to an actual [varsity] sport at Paly but will have all the same commitments.”

Club president junior Kesavan Soundararajan says Board game club is made to unite those with a love for board games, both the classics and cutting edge.

“It’s a great club for anyone to join because it’ll be a social time and a fun hangout spot,” Soundararajan said. “[We will play] the classics, with a couple new ones mixed in. We have the medieval age games, like chess, backgammon, online 8 ball pool, and also some new ones, like Settlers of Catan.”

According to club president sophomore Maraleis Sinton, Cadmus Magazine is a new creative writing publication, which allows those not enrolled in a creative writing class to “not only share ideas and stories, but [also] take part in something we have a passion [for].”

“I encourage people to join who enjoy writing stories either fiction, partly fictional, or true to their own experiences,” Sinton said. “Writing has helped me in many ways and I hope to do the same with others. Behind every smile is a story and that’s what I want to share.”

This new club aims to help students turn their ideas into actions that will impact their communities, specifically regarding social justice issues, according to club president sophomore Kristina Im.

“Our main goal is to better learn and understand our ever evolving society and establish a sense of purpose among ourselves and other club members,” Im said. “This club is focused on social justice matters, and gives people outside of the Social Justice Pathway an opportunity to engage in similar endeavors. We will have discussions about relevant worldly issues, and plan to turn discussion into action.”

YIBI, or Youth International Business Initiative, is a business club that aims to recruit students that are interested in business and learning more about business. It is currently an organization that exists off campus, so club president sophomore Eric Yap brought a branch of YIBI to Paly. The club plans to order Fortune magazines to read and discuss, listen to business speakers, and compete in conferences.

This club is dedicated to giving students a place to relax and unwind while watching Justice League episodes, according to club president sophomore Robin De Lorenzo.

“Justice League Club is a feel-good club, so if people have quizzes or tests coming up, they can just come here and have fun watching cartoons,” De Lorenzo said.

Club president junior Jeremy Dou says that this club will give students with this interest an opportunity to “engage, discuss, and help with each other [with] marketing and financing.”

“We’ll do virtual stock trading simulations and future financing planning,” Dou said. “We believe that, by doing this, we can have a better idea of how we should plan our future wisely financially.”

“At our school there are a lot of people with very diverse perspectives and experiences that we can learn from,” Homan said. “In such a politically polarizing time, it’s especially important to be able to respectfully listen to each other and take other people’s perspectives into account, which is what Anthro is here to do.”

SCOOP (Student Cooperative for Openness and Opportunity in Press)

SCOOP, or, Student Cooperative for Openness and Opportunity in Press, is a club aimed at finding ways to enhance diversity within journalistic staffs and within news coverage. The club aims to discover how to remove bias in news covering certain genders, religions, and races. This will be carried out through discussions about many topics such as current articles. It also hopes to emphasize the importance and need for diversity in media coverage. Additionally, students in the club will have the opportunity to write articles and listen to guest speakers.

According to club president Ria Pai, the club aims to educate students about marine biology in an enjoyable way.

“We [will] raise awareness for marine animals captivity and write letters to places like Seaworld talking about how capturing marine animals is terrible,” Pai said. “We want to show people that science can be exciting!”

According to club vice president Maya Wilson, students will gather to write and discuss their ideas.

“Roots is a environmental club which guides students to plan and execute projects which benefit our environment,” Merk said. “Our goal is to to make Palo Alto High School a more environmentally-friendly school by helping students take initiative to fight climate change.”

Club president sophomore Eileen Ha says that Pet Pals will be committed to making toys, beds, accessories and other items for their pets and for animals in local shelters.

“The purpose of Pet Pals Club is to share love with our beloved pets by giving them handmade gifts,” Ha said. “We also plan to share love with animals at animal shelters by donating dog and cat toys that we make. It’s okay if people are not good with making stuff because we all will share ideas and help each other.”

This new club will inform members about archery and encourage students to try out archery, according to club president junior Andrew Suk.

“We teach about archery concepts and prepare people who do want to shoot at nearby archery ranges,” Suk said. “People should join because people do not know much about archery and many people haven’t experienced the joy of shooting a bow, especially when shooting with friends.”