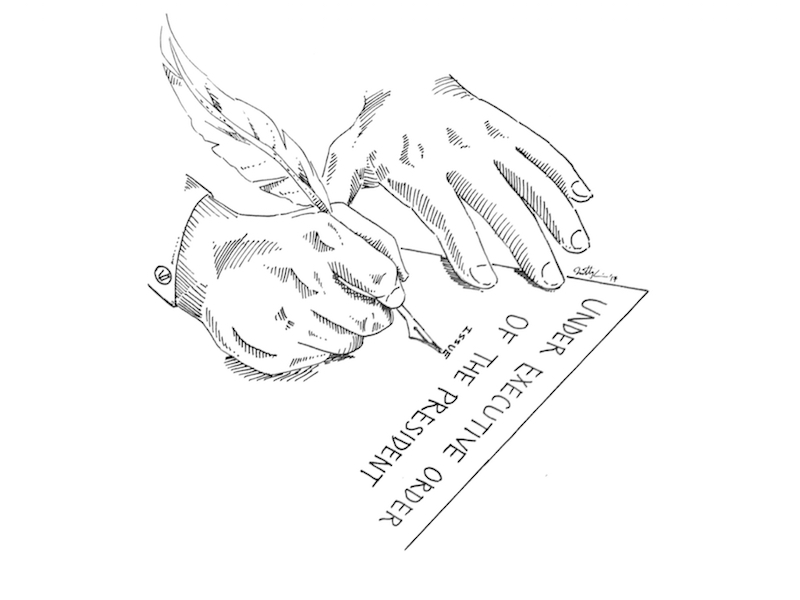 The 45th president of the United States had a very busy first week in which he issued several executive orders reflective of his major campaign promises. Below is a list of some of the most noteworthy actions taken  by President Donald J. Trump during his first week in the Oval Office.

The president’s first executive order was passed on the day of his inauguration, which is a relatively vague order aiming to “minimize the economic burden” of the Patient Protection and Affordable Care Act.

It begins with President Trump declaring that his administration will work to replace and repeal the act. The order itself is intended to reduce costs of the Affordable Care Act until this replacement occurs.

Washington executives with authority under the act, such as  have the power to “waive, defer, grant exemptions from, or delay the implementation of any provision or requirement of the Act that would impose a fiscal burden on any State or a cost, fee, tax, penalty, or regulatory burden on individuals, families, healthcare providers, health insurers, patients, recipients of healthcare services, purchasers of health insurance, or makers of medical devices, products, or medications.”

Trump’s next executive order was passed four days later, this time “expediting environmental reviews and approvals for high priority infrastructure projects.” Trump identifies the purpose of the order as an effort to increase the efficiency of decisions to promote infrastructure investment in order to grow the American economy.

The president aims to expedite the process by implementing a 30-day period following a project’s proposal, during which time the importance will be determined. If it is deemed to be highly beneficial to the “general welfare” of the nation, it will be labeled as a “high priority.”

The Chairman of the Council of Environmental Quality and the head of the relevant agency will then design “expedited procedures and deadlines” for the completion of environmental reviews and approvals of “high priority” projects.

Trump introduces the order by stating “The purpose of this order is to direct executive departments and agencies (agencies) to employ all lawful means to enforce the immigration laws of the United States.”

The action will also “ensure that jurisdictions that fail to comply with applicable Federal law do not receive Federal funds, except as mandated by law.”

Trump also emphasizes his desire for government agencies to utilize “all available resources” in ensuring that immigration laws and regulations are followed without exception.

President Trump’s next executive order, which was issued on Jan. 25, was intended to reduce the strain on both federal resources and federal organizations responsible for maintaining border security. Trump specifically names illegal immigration across the southern border as the cause of this strain. In line with one of President Trump’s most notable campaign promises, this executive order begins the process of constructing a wall on America’s border with Mexico.

The action’s most notable component is the process to “secure the southern border of the United States through the immediate construction of a physical wall on the southern border, monitored and supported by adequate personnel so as to prevent illegal immigration, drug and human trafficking, and acts of terrorism.”

The order also pushes government agencies to speed up the process of determining the eligibility of a person detained on suspicion of violating US immigration policy.

On Jan. 27, Trump passed an executive order which implements a “Suspension of Issuance of Visas and Other Immigration Benefits to Nationals of Countries of Particular Concern.” These countries include Iraq, Iran, Syria, Yemen, Sudan, Somalia and Libya.

Trump also ordered that for a 90 day period, “immigrant and nonimmigrant entry into the United States of aliens” from these 7 countries will be restricted. Foreign nationals traveling on certain diplomatic visas will be exempt from this restriction.

Travelers who are detained are subject to vetting and investigation. Once they have been evaluated, the travelers will be either be permitted access to the country or denied it, depending on whether or not they can be confirmed as peaceful.

The order also mandates that the members of his cabinet carefully read and then sign the document.

On Jan. 28, the president passed an executive order impacting federal regulation of business. This executive order requires a minimum of two previously existing governmental regulations of business to be proposed for elimination whenever a new policy is implemented. It is in line with his “one in two out” campaign promise.

Trump declared that that it “is important that for every one new regulation issued, at least two prior regulations be identified for elimination, and that the cost of planned regulations be prudently managed and controlled through a budgeting process.”

This executive order specifically affects the “fiscal year 2017, which is in progress”. This statement restricts the longevity of the order to the end of this fiscal year.

The order also mandates that “the total incremental cost” of  all new regulations, including repealed regulations, finalized in 2017 cannot exceed zero, unless otherwise required by law or if advised by the Director of the Office of Management and Budget (Director).

Trump has had a very busy first week, and this will not be the end of his actions as president. Check back with The Paly Voice for future breakdowns of the Trump administration’s actions.