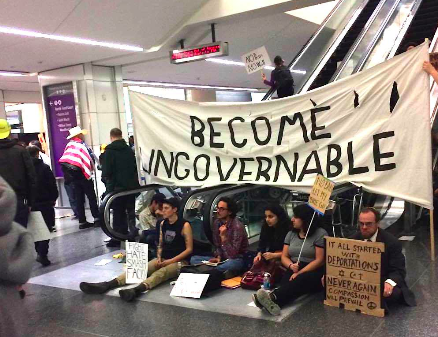 Locals gather at SFO in an effort to pressure officials to release five detainees as a result of Trump’s recent travel restrictions. Photo by Harrison Frahn.

While a typical airport experience for most entails never-ending check-in lines and snail-paced Transportation Security Administration checks, the scene described by Palo Alto High School students at the San Francisco International Airport this past weekend was anything but ordinary. As TSA officers watched from behind glass doors, police donned in riot gear pushed through a crowd of hundreds of Bay Area residents who were protesting President Donald Trump’s Jan. 27 executive order to ban all travel between the U.S. and seven Muslim-majority countries, including Iran and Syria. Despite the Department of Homeland Security’s ruling that such restrictions did not apply to US residents, or “green card holders,” Trump and his advisers said that these lawful residents would be granted entry upon their return on a case-by-case basis.

Residents of the seven banned countries were detained in airports across the country, including nearby SFO, which held five detainees as of Sunday afternoon. However, they weren’t alone; backing them up were hundreds of protesters from around the Bay Area. Among the crowd were several students, who told The Paly Voice that they had no plan to leave until those five people walked out of the terminal with them.

One of the attending Paly students, junior Lia Straight, said she felt compelled to join the protest because she wanted to aid detainees as well as stand up against the current state of US politics.

“I decided to go to the protest today because if I didn’t go, if I didn’t stand up and fight everyone’s rights, who else would?” Straight said. “I’m not a lawyer. I’m not anyone in a position of power, but I can go to this protest and I can help shut down SFO and put pressure on Trump and our government to stop violating people’s rights and the Constitution.”

One of the other attending students, sophomore Harrison Frahn, recounted learning about the implications of Trump’s ban from his fellow protesters.

“I talked to several people who were immigrants or refugees, and were allowed to come to the U.S. legally,” Frahn said. “One of them told me that it took him seven whole years to get his green card after he came to the U.S., and he that it took others even longer. This just shows how clueless the Trump administration is, because to get a green card, you already have to go through extremely extensive screening, and now, with the ban, you are not even allowed to enter the country.”

Despite appearances by riot police, Straight described the general ambiance as peaceful, jubilant and dedicated.

“It felt like we were all making history and doing something to actually make a difference, and that really helped the vibe of the protest,” Straight said.

“This wasn’t just a little temper tantrum,” Straight said. “It was an organized movement and it felt like it. Restaurants sent us food, people told stories of how Trump’s executive order affected them, moms brought their toddlers and set up stations to make signs [and] people supported one another. SFO is a very large airport, but it felt incredibly small with the [tens] of hundreds of protestors screaming and chanting and taking up space, persisting in this fight for people’s rights.”

“It was very uplifting to see that there are so many people united against hate and discrimination and that so many people are willing to fight for the rights of others,” Frahn said. “We were all there to show the Trump administration that the American people will stand up for the rights of all people, to show that not all Americans support the kind of discriminatory policies that the Trump administration is putting in place and that we will fight to make sure that nobody is treated unfairly or discriminated against based on their beliefs.”

After a weekend of full of marching, chanting and pure determination, protesters received word that the five detainees had been released at around 7 p.m. Sunday evening.

“It felt like we were all making history,” Straight said. “We surrounded the entire international terminal of SFO with a thick band of protestors, marching and chanting. We shut down Terminal G, we stood our ground in the face of police, and we made a difference.”

Click through the slideshow below to see the photos Straight and Frahn took at the protest.