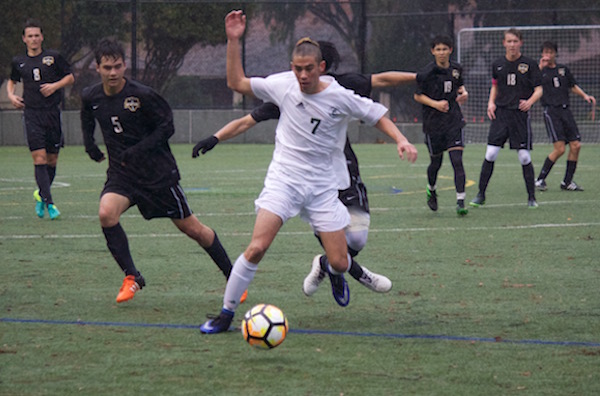 The Vikings started off the game with a strong offensive push, making an attempt to score half-way through the first half. Senior midfielder Marcel Colchen gained possession of the ball and quickly passed it to fellow senior midfielder Yahli Malchin, who proceeded to barely miss a strong shot over the left corner of the goal.

“We are still working on our offensive capabilities,” senior Nicholas Camarena said. “We have a few players who are good offensively who are injured right now and when they get back, we should be looking at scoring some more goals.”

After losing their first league game against Los Altos High School last week, 4-2, the Vikings stepped up their defensive game, never letting the ball stay on their side too long.

Senior goalkeeper Michel Ange Siaba played a key role for the Vikings’ defensive squad, shutting out the Mountain View offensive with a couple impressive saves, including a first half corner kick that hit the side post before ricocheting into Siaba’s arms. He also made a close save in the final minutes in the game, stopping the Spartans’ last attempt to win the game.

Despite a rocky start to the season, Camarena is still optimistic about the team’s chances at winning Central Coast Sections playoffs.

“I think we will start improving once a lot of players start coming back from injuries,” Camarena said. “We are still hoping to get a positive record for our wins and losses. Our goal since the beginning of the year has been to win CCS and we are hoping to do that this year.”

The Vikings head to Homestead High School for their next match at 3:30 p.m. on Thursday.