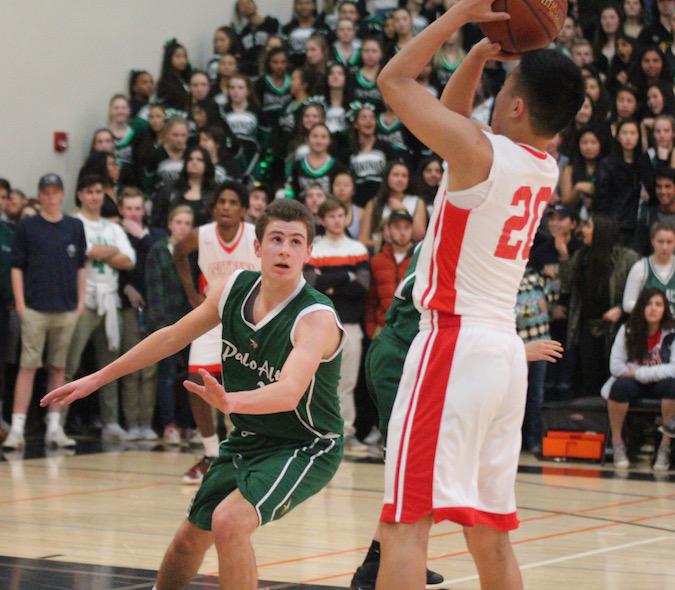 Paly won the opening tip and junior forward Max Dorward raced down the floor for an easy layup, which set the tone for the rest of the game. The Vikings utilized their height advantage over the Titans to run cash in for easy points in the paint. In addition, they moved the ball early, leading to countless uncontested jumpers and a flurry of scoring to open the game.

Although mostly disciplined and composed, the Vikings continue to struggle with careless turnovers. Coach Peter Diepenbrock was visibly upset after strings of unforced turnovers from the team. Paly was able to counter its carelessness with the ball by playing stingy defense and shutting the Titans down on offense.

The Vikings took an early 19-6 lead after four minutes of play in the first quarter and never took their feet off the gas pedal. At the half, the Vikings led 47-29 and continued to pummel the under-sized Titan squad throughout the remainder of the game.

Junior shooting guard Spencer Rojahn, who recorded eight points along with six rebounds for the Vikings, said the win is a great sign for the team moving forward.

“This big win gives us confidence going into the season, but we need to be able to handle success and continue to work hard in practice,” Rojahn said.

The Vikings stayed composed despite the large lead. Dorward led the Vikings with 20 points, seven rebounds, three assists and two steals, including 10 points in the first quarter. Senior guard Miles Tention chipped in with 10 points, four assists, three rebounds and three steals. Exceptional ball movement enabled 13 of  Paly’s 14 roster players to score either from the field or the free-throw line during the game.

Dorward said he was impressed by the significant win margin, but the Vikings still have aspects of their game to study and work on.

“We played well and I thought we exceeded our expectations, but we have to continue to improve,” Dorward said. “We will look at film to see what we have to work on, but we definitely have to cut down on our turnovers.”