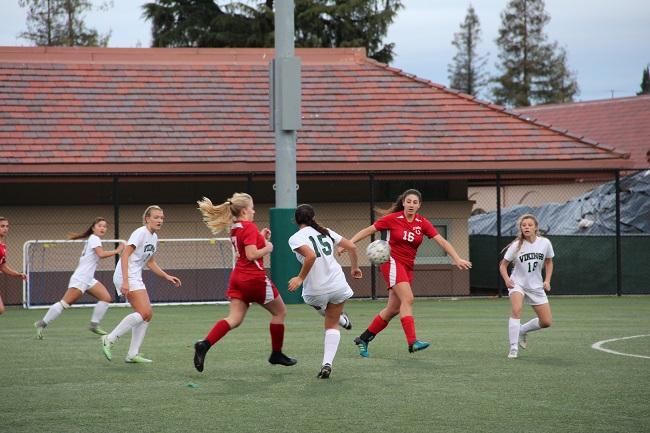 There are several consistent occurrences at Palo Alto High School that one can count on to transpire annually. The senior deck will get vandalized, The Paly Voice will publish excellent articles and the Paly girls’ soccer team (5-0, 0-0) will dominate its competition. This season is looking like it will be no different. With a stunning 11-0 victory over El Camino High School (0-6, 0-0) yesterday, the Vikings extended their undefeated streak to five games.

The Vikings commanded complete control of the game in the first five minutes, scoring twice in rapid succession. The first goal came off a direct free kick by junior forward Ally Scheve, quickly followed by a second goal from sophomore forward Leela Srinivasan. Paly kept the ball on El Camino’s side of the field for the majority of the first half, scoring three more goals before the initial 45 minutes came to a close.

Despite entering the second half with a score of 5-0, the Vikings did not slow down. Paly continued to extend its lead, scoring six additional goals to bring the final score to 11-0.

“It [the game] definitely gave us a chance to work on some other skills we wouldn’t have been be able to practice against harder teams like M-A [Menlo-Atherton High School],” Maloney said. “It’s also nice to have players who normally wouldn’t play an entire match come into the game.”

The game allowed the Vikings to work on their team chemistry, something that had been lacking since the start of the season.

“The past couple games, especially against M-A, we really came together,” Maloney said. “Even though we’ve only practiced maybe four or five times since we’ve started this season, the chemistry is definitely getting better.”

Freshman Sophie Vogel agrees that the team started to connect the more they played together.

“It’s really just starting to click, since the beginning of the season was a little off,” Vogel said. “Now we’re playing off of each other.”

Vogel is one of two freshman players that made the varsity team this year. Eleven new players total were added to varsity this season, upsetting the team’s leftover chemistry from last season. Despite taking so many new players, the problem seems to be receding and will soon be behind them, according to Vogel.

The Vikings’ chemistry will be put to the test once again at 10 a.m. on Saturday, as they take on the Terra Nova Tigers (2-2, 0-0) at Terra Nova High School.