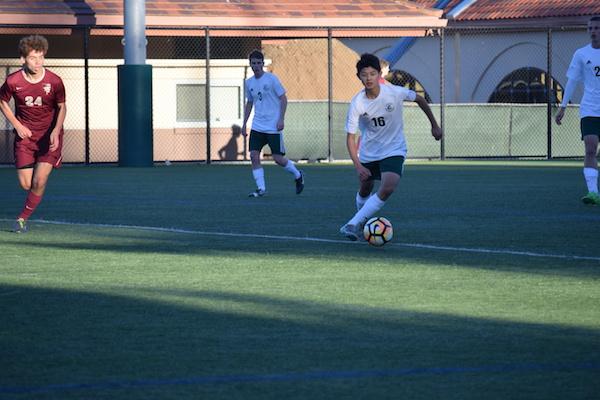 Viking senior captain and center defender Neil Verwillow scored the only goal of the game within the first five minutes of play. He later injured his neck after colliding with a Menlo-Atherton player’s shoulder. However, after sitting out for a while, he substituted in and made several key plays during the second half.

His teammate, sophomore outside midfielder Kenzo Morabia nearly scored another goal, but it was not counted as he was ruled offsides. Senior captain Derek Schoenberger also made an attempt to score during the second quarter, but was thwarted by Menlo-Atherton’s goal keeper. Despite an aggressive first half, the Vikings tapered off at the end of the first half of the game, working to preserve their lead.

“During the first half we were very aggressive offensively and we attacked hard, especially in the first 20 or so minutes when we got the goal,” senior Yahli Malchin said. “After that we kind of dropped back and tried to defend the lead, so the second half was more conservative than the first.”

During the second half, Schoenberger received a yellow card after tripping a Menlo-Atherton player and thus conceding a free kick. However, the Vikings easily blocked the strike, and the close match continued, with both sides continuously trading possession.

In the last two minutes of the game, senior Charles Stoksik also received a yellow card, but quickly returned to the game.

“Defensively we felt very solid despite a few close calls, and offensively we did definitely lack a bit,” Verwillow said. “We put [senior] Michel Ange Siaba, who usually plays forward for us, [as goal] keeper … just to ensure we didn’t make any mistakes back there, [since] he is a great keeper.”

Senior goal keeper Michel Ange Siaba made multiple saves during the game. He and the Vikings’ defense worked hard to stave off any further attempts by Menlo-Atherton to score.

Despite a scoreless second half, Siaba believes his team played well.

“This was one of those games that tells us will happen at CCS [Central Coast Sectionals playoffs], because MA [Menlo-Atherton] is one of those teams that always makes it to CCS,” Siaba said. “There is a good chance that once we go to CCS, we would have to play them, and this was a good determinant of how it is going to be.”

Verwillow agreed stating that winning this game was a taste of the competition during CCS.

“That was a tough team, … so it [was] a good check to see how we will be able to compete come the end of the season,” he said. “I was satisfied with how we played, mostly just glad to get the win.”

The team’s next game will be at 6 p.m. tomorrow at Paly against Burlingame High School.