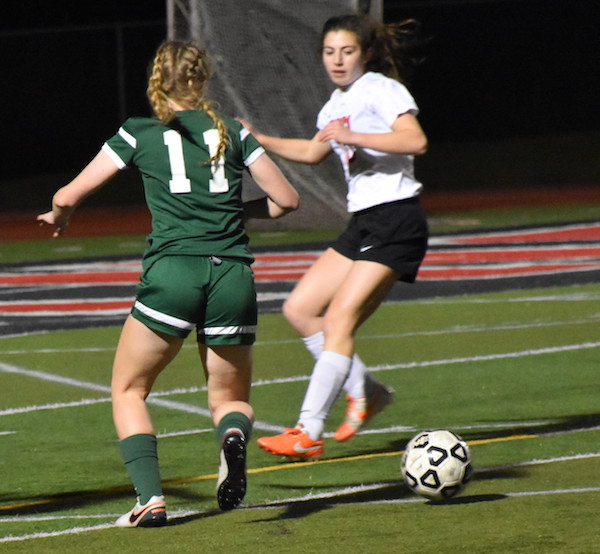 After a 3-0 victory against Woodside High School on Monday, Paly hopes to win its second consecutive game and continue a winning preseason record, according to senior midfielder Tess Preising. The Vikings played a strong match despite the loss of significant seniors from last year, including current UCLA freshman star, Jacey Pederson.

“I think the team is going to focus on advancing our play throughout the season,” Preising said. “We lost a lot of key players but I think we came out really strong yesterday and I hope we can carry that out through the season.”

Although today’s game is merely a preseason match, senior defender Lauola Amanoni anticipates a spirited competition due to the cross-town rivalry between the two teams.

“Gunn and Paly is the best rivalry in Palo Alto, and it is always a fun game to watch and play,” Amanoni said. “So far though, Paly has gotten the best of Gunn in the recent years we have played them.”

Junior midfielder Emily Tomz echoed the competition that comes with playing a rival.

“I definitely think there will be a competitive spirit at the game this Thursday against Gunn,” Tomz said. “Although it is a preseason match and they are not in our league, every game counts, and there is a historical Gunn-Paly rivalry that will make this game intense and exciting. Also, the boys soccer team will be there cheering us on, so it’s good to know we will have a lot of support from the stands this game.”

According to senior midfielder Talia Malchin, the Vikings will take this opportunity to display their newly developed talent during the match and to test the team chemistry.

“We are really trying to figure out how to play as a team and I think the game versus Gunn will be a great opportunity to do so,” Malchin said. “We haven’t had very much time to practice in game situations, so the game will be a good time to get down chemistry. We know how Gunn plays because we’ve played them before, so I think our focus will be on team play. Organization and communication will be a priority.”