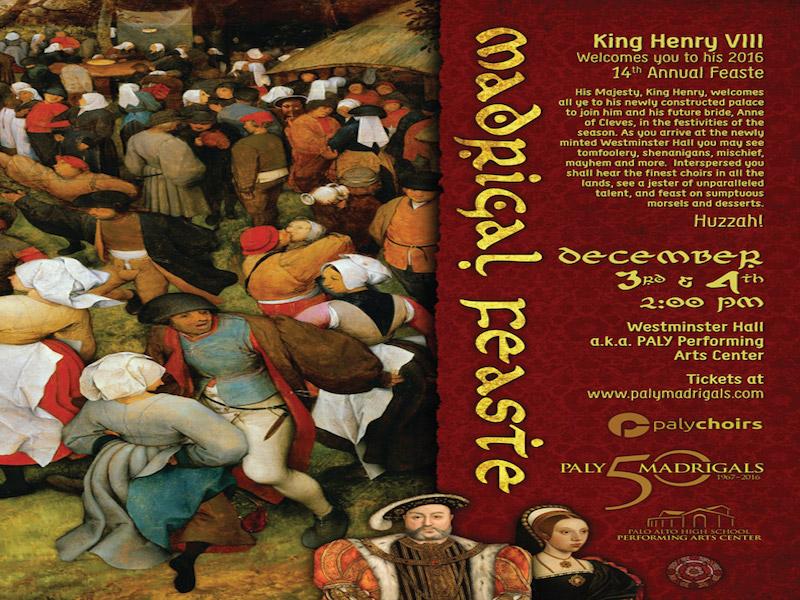 The Palo Alto High School Choir program will host its 50th annual Madrigal Feaste this Saturday and Sunday at 2 p.m. in the Performing Arts Center, otherwise known as Westminster Hall.

According to choir member and senior Georgia Wood, the Feaste, which revolves around King Henry VII, will consist of a concert, play and dinner and will last two hours.

“The Madrigal Feaste is our annual Christmas performance,” Wood said. “It includes not only songs from the various choral groups such as Concert Choir, Spectrum, Madrigals or the Acapella groups, but also a storyline surrounding King Henry the VIII and his court, and food served to the audience by freshman choir members.”

“The script, written by Grace Barry, is hysterical,” Bernstein said. “If you listen close enough, the dialogue references a lot of political figures and events, making the script a bit more engaging for the audience.”

Choir member and senior Georgina Wu encourages everyone to attend.

“The script is very cleverly written and super hilarious,” Wu said. “It’s probably the best one of all my four years at Paly, so everyone should come watch the show.”

The price of admission ranges from $35 to $100, depending on how close the table is to the stage. Tickets are sold here.