Little ones in the big leagues: Freshmen on winter varsity teams 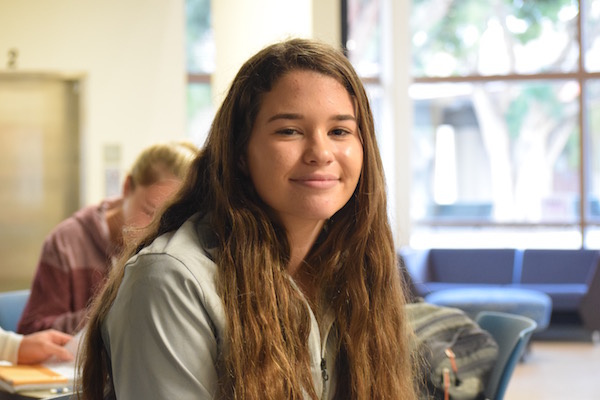 Palo Alto High School varsity sports are known for being competitive. Athletes who participate in varsity sports are often upperclassmen, though a few younger students are able to make the cut. Sometimes even freshmen get to compete at the varsity level. This winter, there are three.

Read more to find out who they are and what they do.

PV: How did you start playing soccer?

SV: I started on AYSO [American Youth Soccer Organization] like most people do. My parents put me in a lot of sports when I was younger, and I stuck to soccer because I liked it a lot more than the others.

SV: Varsity is similar to my club experiences because I already play up one year [with girls one year older]. I don’t really see the girls on my club team outside of soccer, so it’s different playing for a school team because you get to see the people on your team all the time.

SV: Since we’re [Chloe and I are] the youngest, everyone [else] has already had experience and played together for a year, so it’s hard being the newest.

PV: What’s your favorite thing to do outside of soccer?

SV: My favorite thing [outside of soccer] would be to either read or draw.

PV: What are your goals for this season? For the next four years?

SV: For this season, I want to just try my best. For the next four years, I want to improve and keep getting better.

PV: How did you start playing soccer?

CJ: I started with Kidz Love Soccer and then played AYSO. Right now I’m playing in NPL [National Premier League] on two different teams. I play one year up and I also play four years up.

CJ: Playing varsity is similar to my club team because I’ve played four years up before, so I’m used to being the youngest on the team. The environment is different because club is known for being a little more intense, so it’s nice to come to Varsity and breathe a little bit.

CJ: The hardest thing is getting to know everyone socially and on the field, since we don’t really know anybody yet.

PV: What are your goals for this season?

CJ: I want to score as much as possible and impact the team. I don’t want to just be the standby freshman. My club is becoming an academy which means I won’t be able to play after this year, so I have to pack the whole experience into one year.

PV: What are you most excited about for this season?

CJ: I am excited to do something I love with people who love it too.

PV: How long have you been playing basketball?

GT: Ever since I was really little I played, but I stopped in seventh grade because I had too many injuries. I am just starting again this year.

PV: How did you start playing basketball?

GT: My parents were always into making us [my siblings and me] play sports and making us go out there and be teammates. I started because my dad pushed me into it, and I just kept with it because I liked it.

GT: My past experiences have varied a lot. I’ve played on AAU [Amateur Athletic Union], with boys on AAU, in middle school with some interesting coaching. This year, there’s a really great coach and group of girls who really support you and know what they’re doing.

PV: What is your favorite thing about being on the team?

GT: There’s a lot of jokes like “We have a freshman now, she can carry the stuff in,” but it’s all funny.

PV: What’s your favorite thing to do outside of basketball?

GT: I’m really into volleyball because when I was injured I had to find another sport to play, so I went into volleyball. Right now I’m doing club [volleyball] and [Paly] basketball.

PV: What are your goals for this season? For the next four years?

GT: I know that last year we won CCS [Central Coast Section playoffs] and that a lot of seniors graduated, so I don’t want to let down the team or anything like that. I want to help us go as far as we can. For the future, I want to stay playing basketball with these girls.