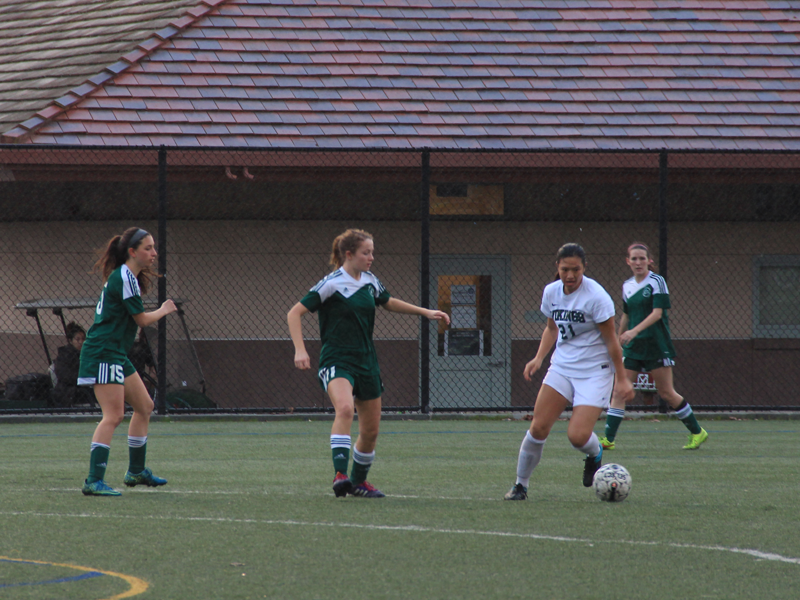 After a riveting 4-3  loss to Archbishop Mitty High School Monarchs (14-2-5, 8-1-3)in the first round of the Central Coast Section playoffs last season, the Palo Alto High School (16-2-1, 10-1-1) girls’ soccer team hopes to make another playoff run despite the loss of key seniors.

Paly has turned the, 4-3, loss to Archbishop Mitty into a source of motivation, according to senior forward Tess Preising.

“The outcome of the game wasn’t the result we wanted but we definitely learned a lot throughout the season,” Preising said. “It was a game we had a very good chance of winning but I think the team got stronger and even more motivated because of the experience. We are definitely looking to win [CCS] this year.”

According to senior defender Lauola Amanoni, the loss of last year’s seniors Jacey Pederson, Heidi Moeser and Allison Lu will greatly affect the leadership of the team, but this year’s returning upperclassmen are prepared to fill those roles.

“They [Pederson, Moeser, and Lu] were a huge part of our success last year and we’ll definitely miss them but we have many players such as Tess [Preising], Talia [Malchin], and Emily [Tomz] who are ready to take over with leadership,”Amanoni said.

In addition, the team will be just as competitive as last season due to the addition of talented underclassmen, according to Preising.

“We lost some good talent but we have many new players that can fill their spots,” Preising said. “[freshman forward] Chloe Japić is someone to definitely watch for.”

Preising said the team’s biggest weakness is its lack of chemistry due to new players.

“I think the weakness right now is that we are all not very comfortable with each other on the field and don’t know each other’s strengths or weaknesses yet,” Preising said. “Hopefully through more practice, we will get better and more cohesive in our play.”

The Vikings will take on rivals, Menlo-Atherton High School, at 2:30 p.m. on Saturday at Paly.