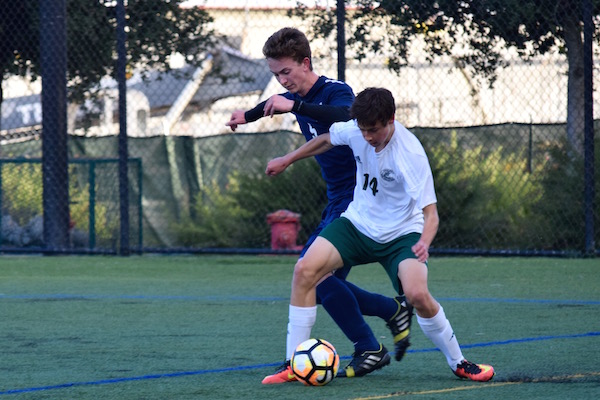 After an undefeated regular season that ended with a devastating loss in the quarterfinals of last season’s Central Coast Section playoffs, the Palo Alto High School boys’ soccer team hopes to repeat last year’s success and advance to the final round of CCS.

The team is optimistic about its chances to do well in CCS this season, despite losing many graduated seniors. Last year, the Vikings remained undefeated until CCS quarterfinals, where they fell, 3-2, in overtime to Watsonville High School.

“Although we lost many great seniors last year, we gained a lot more [sophomores] this year,” senior captain Derek Schoenberger said. “I’m not worried about the loss of seniors. This year, we have a group of guys that have been playing together for years and a fresh new group of underclassmen.”

One of the departed seniors included the team’s goalkeeper, Eli Friedlander, leaving a large hole in the Vikings’ defensive roster.

“With no clear starting goalie at this point, there are a couple a good options … but we have yet to see them in games, and it’s hard to replace someone like [last year’s goalie],” senior team captain Neil Verwillow said.

However, the Vikings have gained many new seniors,  who were inspired to join as it dawned on them this was their last year to play for Paly, according to Verwillow. Four seniors as well as five juniors and sophomores will be joining this year’s roster.

“I had played for my club team the last three years during the winter, but I decided to play [high school] soccer with my friends in my last year,” senior Nicholas Camarena said.

“The guys coming out are very good, so if anything, I believe we have the potential to be even more competitive than last year despite the loss,” Verwillow said.

Verwillow is excited for another shot at the CCS championship, and encourages student to attend the games.

“It’s a blast when people come out to the games and it makes us all play that much harder,” Verwillow said. “I also can’t wait for another chance at CCS, no matter what it takes to get there.”

Beyond doing well in CCS, the team also has goals to develop stronger team bonds.

“In past years we’ve had great groups of individual players, but never really a strong holistic team,” Schoenberger said. “This year one thing [that] seniors are trying to change is the attitude that is carried throughout the year of not only playing lights out during games, but during practices too.”

The Vikings played their first preseason game on Nov. 21 against Mountain View, winning 3-0.

“I think we played pretty well … there is definitely lots of room for improvement,” junior Xander Sherer said. “I think it was a good opportunity for some of the new players to get a feel for varsity game play.”

The team’s next preseason game will be at 3:30 p.m. today at home against Menlo-Atherton High School. The regular season will start Jan. 5 at an away game against Los Altos High School.