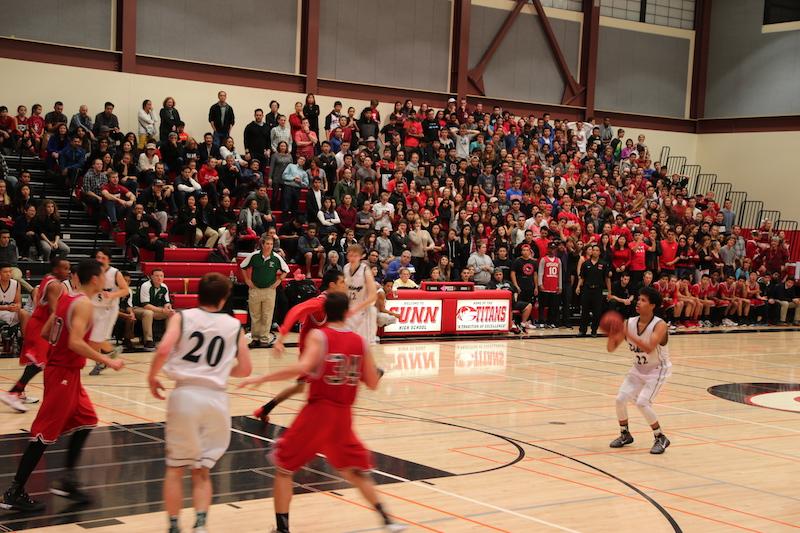 Junior guard Miles Tention rises up to take a outside three in the third quarter against Gunn High School at Gunn. The Vikings went on to win 74-56. Photo by Jack Stoksik.

Experienced head coach Peter Diepenbrock says the team will thrive off of its returning core players.

“The nucleus of the team is largely the same from last year,” Diepenbrock said. “But we are one year more experienced.”

After an unexpected, 54-50, loss to Cupertino High School in the quarter finals of CCS last year, junior guard and three year veteran Max Dorward is fired up to make a deep CCS playoff run.

“Last year was disappointing when we lost to Cupertino because they were a very beatable team,” Doward said. “We knew we were the better team and knew we had a chance to win it all. I’m very excited to be playing with almost all the same guys this year and to make a deep playoff run.”

Dorward said the team has gelled over the years, and is ready to leave it all on the court.

“We’ve definitely improved on the aspect of playing with each other,” Dorward said. “We’ve played together for a while now so things seem to be clicking on the court.”

Simison said he is pumped for his final year of Paly basketball, and believes that the team’s depth will give the Vikings a better shot at the league title and beyond.

“I’m excited for the entire season, every single game,” Simison said. “We have more players this year that give us a deeper bench and more rest for our starters. This year we plan to win league and get into the open division for CCS.”

Schlemmer said he wants to see the stands filled, as this year’s team is guaranteed to impress.

“Everyone should come watch the games this year because I think this is the best Paly basketball team there has been in a long time,” Schlemmer said.

With one of the top point guards in the De Anza League in Tention, an experienced lineup and the leadership of Diepenbrock, the Vikings are primed to kick off their league season on Jan. 3 against Milpitas High School at Gunn High Schoo