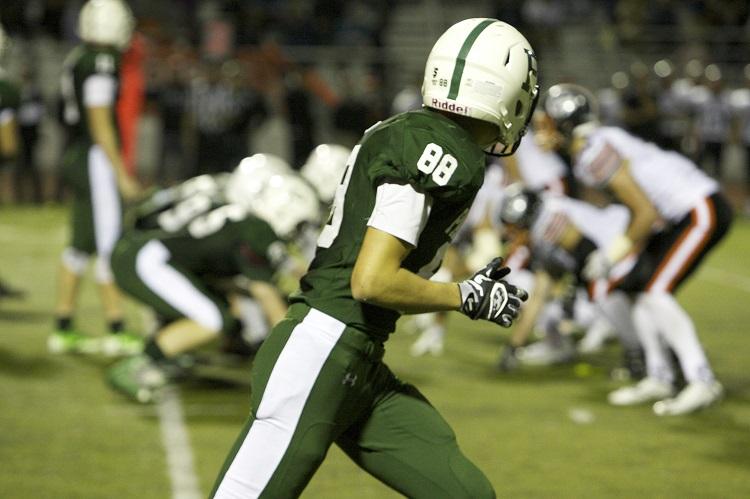 The Palo Alto High School Football team wrapped up its season with a 4-7 overall record and 3-3 league record after a loss to the Los Gatos High School Wildcats (8-3, 6-0) in the first round of the Central Coast Section playoffs.

The Vikings were carried throughout the season by junior running back Paul Jackson III who accumulated 1266 rushing yards on 222 carries, along with a team leading 12 rushing touchdowns.

The season looked promising for the Vikings, who who started off with a 25-12, victory over Patterson High School in the first game of the year.

Sophomore quarterback Jackson Chryst took over at the head of the offense following a concussion to senior starting quarterback Jordan Schilling in the Vikings’ week two loss to San Benito High School.

According to head coach Danny Sullivan, the future of the team was set forth from this years’ graduating seniors.

“We are going to miss some key senior talent and leadership,” Sullivan said. “The examples that this year’s senior class set is something that I will remember forever. They had to deal with change and they bought into what we are trying to accomplish.”

A highlight of the season included defeating the Wilcox Chargers (5-6, 4-2) during a regular season league matchup. The Chargers went on to finish second in the De Anza League.

“They were the No. 1 team in the league at the time and we won,” Schilling said. “That was one of the best games in my playing career.”

The Vikings’ finished fourth in the De Anza League, which secured them a spot in CCS playoffs.

“In my first year at Paly, there were some definite challenges by being a new face to the area,” Sullivan said. “I am thankful that the school and the players that stuck it out through the season welcomed me to be a part of the program. There were some lows, along with some very big highs for our team this season. Definitely some things that the kids coming up through the ranks can build on for next season.”

The Vikings look to make a mark next year by starting preparation for the 2017 season soon.

“Workouts in the weight room to build strength and conditioning are going to begin in late January,” Sullivan said. “We have a goal to show people how much we can improve from one season to the next. In talking with many other coaches around the area, the word is out about how we do things here at Paly. They all know that if the work gets put in, we are a team to be reckoned with in 2017.”

According the Schilling, the future of Paly football looks promising.

“I really think the team as whole improved week to week,” Schilling said. “This year was tough because we had to learn a whole new offense and adjust to a new system.”

The team will depend on the talents of sophomore quarterback Jackson Chryst, junior running back Paul Jackson III and junior lineman Bryant Jefferson for leadership in the coming season.

“Our program can take drastic strides next season if junior Bryant Jefferson can continue to improve and if sophomore Jackson Chryst can grow as a player on the field,” Sullivan said. “If those two have a successful offseason, the rest of the team will follow their lead.”