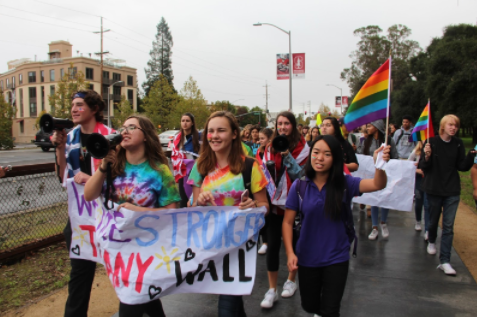 A group of students exercised their rights and organized a peace march during Flex period. The march not only included students from Palo Alto High School, but also from Gunn High School and Castilleja. According to the Palo Alto Peace March Facebook page, “The goal of this march is to spread messages of love, unity, acceptance and equality.”

Students marched from the Quad to the El Camino intersection which was blocked off with the aid of the Palo Alto Police Department. While walking, the students cheered, chanted and held up signs that were made. The main event was at Lytton Plaza on University Avenue in downtown Palo Alto. Many students gave testimonies that were emotional and personal.

“I didn’t write anything down, it came from the heart and I felt like I made an impact in the community,” junior and speaker Richard Islas said after speaking to the crowd.