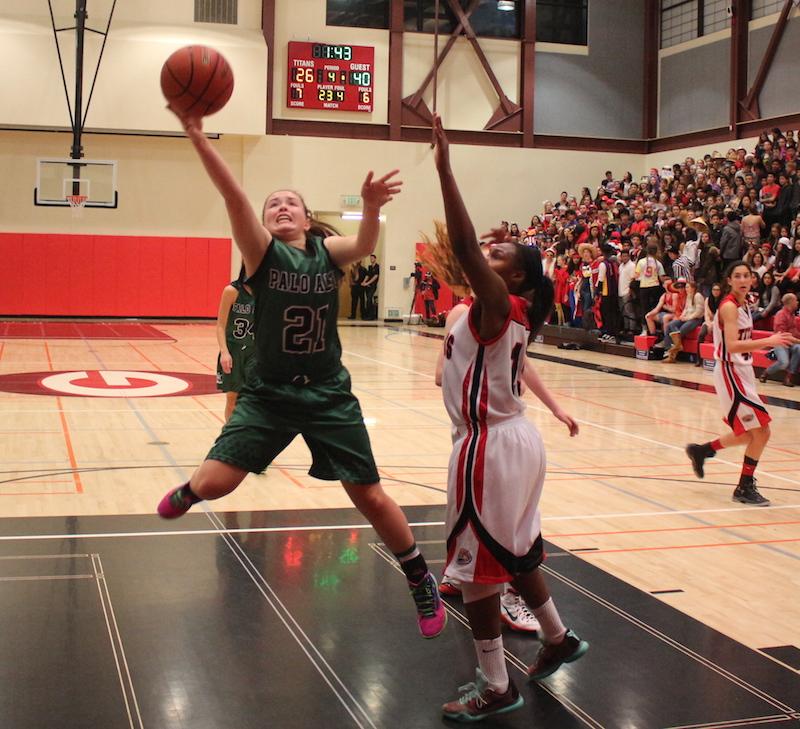 Junior forward Julie Chandler leaps in the air as she goes up for an acrobatic layup against Gunn late in the fourth quarter on Friday at Gunn. The Vikings beat the Titans, 40-28. Photo by Sam Lee.

After a 1st place finish in the CCS playoffs and a first round NorCal loss, the Palo Alto High School girls’ basketball team hopes to return to CCS finals.

The girls’ team dominated leagues last year, posting an overall record of 19-8, en route to winning CCS. The girls team fell to Dublin High School Gaels, 55-49, in the first round of NorCals.

Senior and fourth year guard Lauren Koyama hopes to put last year’s early NorCal exit behind her, and is ready to start the season this winter.

“Getting eliminated early definitely hurt last year, but right now we are focused on getting through preseason and league.” Koyama said. “We want to peak in February, and we just have to take it one game at a time.”

“We lost three starters last year, one of them being our main source of height on the court. In order to adapt we need to work hard for every rebound and bring the energy that our seniors last year brought [to] every game,” Burris said.

The loss of Harris will have the largest impact on the team, as she led the team in both scoring and rebounding last year, according to Maxpreps.

“We have a lot of guards who are capable of making threes, which can make up for the loss of our post scoring.” junior guard Carly Leong said. “We need to be more physical when it comes to rebounding, because we are a smaller team, and physicality will make up for it.”

Despite the loss, the girls team  maintain their dominance, having eight of the eleven players returning to the team.

“The only major change to the program is how many new players we’re bringing in. The past couple years we’ve been playing with basically the same team, and I think bringing some players up from JV and new underclassmen trying out will give us a new dynamic.” Leong said. “So far, every practice has been so much fun, and I can’t wait for season to start.”

The season starts at 7 p.m tonight, with the Vikings traveling to St. Ignatius.